Going to bed with Gilda

Going to bed with Gilda 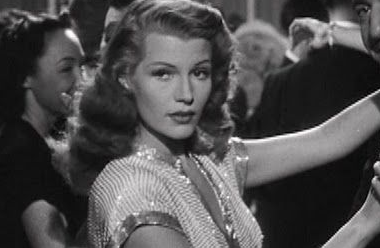 ‘You’re out of practice, aren’t you? Dancing, I mean. I can help you get in practice again, Johnny. Dancing, I mean.’
Rita Hayworth as Gilda, talking to her former lover, Johnny

Poor Rita Hayworth. World famous film star and the GIs’ favourite pin-up in the ‘40s, she struggled throughout her life to be understood as the person she really was.

Born Margarita Cansino, Columbia Studios determined to suppress her Spanish heritage. They dyed her hair red, raised her hairline by electrolysis, changed her name, overdubbed her singing voice and locked her into a restrictive contract.

As Rita Hayworth she made some truly marvellous movies. Only Angels Have Wings, The Strawberry Blonde and The Lady from Shanghai are all certified classics. She is best remembered for her role as the eponymous femme fatale in Gilda. Gilda, married to a casino owner in Buenos Aires, is endlessly sparring with her erstwhile partner, Johnny, who now works for her husband. They seem at the same time to love and loathe each other. Theirs is the very definition of an unhappy, dysfunctional relationship:

‘Hate is a very exciting emotion. Haven’t you noticed? Very exciting. I hate you too, Johnny. I hate you so much I think I’m going to die from it.’
Rita Hayworth as Gilda

The defining moment in Gilda is Hayworth’s seductive performance of the song ‘Put the Blame on Mame.’ Swaggering across the stage in a tight silk dress, ruffling her long red locks, Gilda removes a black opera glove and all over the world jaws drop. After Gilda, Hayworth was marketed as a sex symbol and dubbed the ‘Love Goddess.’  The problem was that in private Hayworth was quiet, introvert and shy. She resented the merchandising, the marketing, the falsehood. She resented having her image painted onto an atomic bomb. But it was too late. What’s more she was also unlucky in love. Married and divorced five times, she consistently attracted the wrong type of man.

‘Men go to bed with Gilda, but wake up with me.’

Poor Rita. From the mid ‘50s the studio turned to less troublesome stars, TV was in the ascendant and the parts gradually dried up. She struggled with alcohol and Alzheimer’s disease until her death in 1987, aged 68. There’s a lesson to be learned from Rita Hayworth. Most businesses inevitably endeavor to mould people to their own purpose. Companies shape employees to fit established precedents, to fill certain roles. Welcome to the machine.

And when young hopefuls join a business, they want to fit in; they want to succeed. They are often happy to model themselves on pre-existing archetypes. They’re prepared to forego their true selves for success; to sacrifice means for ends. But however successful a personality change or character compromise in the short term, artifice never pays off in the long term. The price of pretence is sorrow.

Inevitably, there’s always been a good deal of contrivance and artifice around creative businesses. Affectation and the ersatz have walked hand-in-hand with salesmanship and persuasion. We’ve sold aspiration and dreams to our colleagues and clients, as well as to our consumers. But we should be mindful that artifice can corrode our relationships and undermine our company culture. Because living a lie is contagious.

‘And hearts that we broke long ago
Have long been breaking others.’
WH Auden, Song of the Master and Boatswain

Sadly over the course of my career I observed our industry turn some good people bad, some nice people nasty. Weaker personalities seemed particularly susceptible. And there were a good number of clients who, having been seduced by a pitch process to ‘go to bed with Gilda,’ weren’t too happy with the partner they woke up with in the morning. Of course, authenticity has become an imperative for modern brands. Consumers are looking for transparency, unfiltered truth, the real deal. Similarly authenticity should characterize our relationships with colleagues and clients; it should be a defining trait of our leaders. Progressive businesses must set aside the plastic smiles of yesteryear; the wooden handshakes and steely looks that for so long dominated our offices and conference rooms.

This is particularly necessary in creative commerce, where difference is the chief justification of premium; where competitive advantage is primarily determined by human capital; where diversity of output can only be achieved by diversity of input. Because similarity begets similarity; difference begets difference.

At the very end of Gilda, after no end of drama, the warring couple is reunited. They determine to set aside the bickering and role-playing, the artifice and self-destruction. Gilda looks mournfully towards her partner and says: ‘Johnny, let’s go. Let’s go home.’