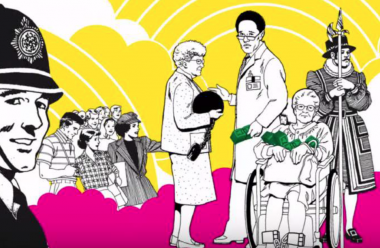 Founded in London in 1961, Amnesty International is the world’s leading human rights activist group, tackling issues all over the globe.

Every 2 years, the London Arms Fair at the ExCel centre trades everything from the latest machine guns to killer drones. However, recent fairs had revealed a more disturbing development: torture equipment and other illegal weapons, like cluster bombs, being advertised for sale, all due UK government inaction and an open loophole in EU law.

This was human rights abuse in Britain. On our soil. On our doorstep.

Despite lobbying and protesting against this; time and time again in 2005, 2007, 2009, 2011 and 2013 the UK government had failed to come out on Amnesty’s side to stop this happening or close the loophole. So in 2015 they looked to the power of marketing and creativity to galvanise public action.

Where previous lobbying had failed, this campaign succeeded in securing a commitment from the government to help close the loopholes in the EU law. The campaign generated over 628K video views, reached 34.6 million people through free publicity, and contributed to +42.6% increase in petitions.

All on a budget which was the thinnest of shoestrings; a piffling £15K.