The Anatomy of Humbug, by Paul Feldwick

The Anatomy of Humbug 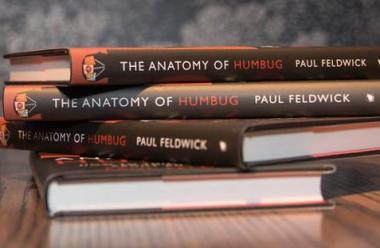 The book is in three parts, but it is the first two (Salesmanship and Seduction) that form its backbone. The third part looks at four other ways people think advertising might work – Salience, Social Connection, Spin and Showmanship.
In Salesmanship, he introduces us to the characters who gave us the language of advertising we all know today. He opens with the first encounter between Albert Lasker (of Lord and Thomas agency) and John E. Kennedy in 1904. This is the age of the mail order ad. Kennedy is a former Canadian Mountie and boldly presents himself at the lobby of Lasker’s offices in Chicago. Kennedy sends a note up to Lasker, saying,

Lasker later meets Claude Hopkins, whose 1924 book ‘Scientific Advertising’ expands on salesmanship, and translates the fashionable desire for efficiency and procedure into a number of rules for advertising. His assertions include ideas such as ‘hail a few people only’ and ‘the more you tell the more you sell’. He states that a good salesman is serious, gives information and does not entertain (‘people do not patronise a clown’). Pictures should only be used if they give information more concisely than words – they are not for attracting attention or decoration.

In 1937 Daniel Starch introduces a new model for print advertising: Attention – Interest – Conviction- Action-Memory and his recognition test.  The notion of attention and memory are introduced to the advertising world. And then with the rise of TV in America, Gallup introduces the concepts of recall and message recall in 1951. Ten years later and Daniel Colley declares in his book, Defining Advertising Goals for Measured Advertising Results, that is too difficult to measure the success of advertising and introduces the idea of management by objectives, moving from sales-based to survey-based outcomes. He introduces the new DAGMAR model,

Replacing Starch’s attention with awareness of the product. Feldwick points out that ‘many people today think that the first A in AIDA stands for Awareness, and assume it refers to awareness of advertising: all part of the retrospective justification of ad awareness as a measure’. Colley’s model also put emphasis on understanding and believing, as Feldwick says, ‘both questionable assumptions that have continued to bedevil advertising and ad research ever since’. And in 1961, Rosser Reeves introduces the notion of the Unique Selling Point, despite there being no real evidence for it.

So by 1961, we have the full lexicon of modern-day advertising: an alphabet soup of the theories and assertions belonging to their time and the channels that then existed: proposition, message, reason why, impact, attention awareness recall, persuasion, comprehension, conviction.

But there is another story to be told which is intimately intertwined with the enduring legacy of Salesmanship – that of Seduction. In 1953 Ernest Dichter – who claimed a passing acquaintance with Freud – set up the Institute of Motivational Research. Dichter believed that the motivations and reasons for our actions are often unknown to us and that the explanations we give are post-rationalisations, and so in many ways he foreshadowed the now established psychological theories of Kahneman among others. Dichter believed that our behaviours are guided by a need for security, status and sex, and he introduced the idea of brand image – his translation of the German term Gestalt (the form or shape).

There were other practitioners of Motivational Research, but the man who brought it into disrepute was James Vicary, who claimed to run an experiment in a cinema to demonstrate the power of subliminal advertising on choice. This was 1956 and the McCarthy era, and the thought that people could be manipulated into doing things they didn’t want to was quickly jumped upon by governments, and subliminal advertising was banned in the US and UK.

In 1957 Martineau published Motivation in Advertising, and asserted that people are suggestible, non-rational, motivated by emotion, habit and non-conscious causes. But it was Vance Packard’s book, The Hidden Persuaders, that caused the bigger stir – an ethical attack on the advertising industry, motivational research and the perceived ‘manipulation’ of audiences.

The death knell for motivational research, however, was not The Hidden Persuaders, but the advertising industry’s response to it.  Rosser Reeves’ 1961 Reality in Advertising asserted that 'There are no hidden persuaders. Advertising works in the bare and pitiless sunlight'. In writing this, Reeves put clear water between his agency, and advertising in general, from motivation research, and further advanced the cause of the salesmanship model. From this point onwards, the unconscious was off-limits – message transmission and attitude change (and the ‘scientific measurement’ of this through research scales) was the only way to talk about the way advertising worked.

For those not wanting to acknowledge authority of this ‘science’ of measurement and persuasion, there was only one answer – to take refuge in art, intuition, judgement. Bill Bernbach reframed the debate, opting to talk about the ‘magic’ of advertising, stating it wasn’t so much what you say, as how you say it. Advertisers were ‘salesmen with artistry’. He thus disassociated the agency he created (DDB) from the motivation researchers and also Reeves, and protected his creative department by using terms that closed down, rather than invited, discussion (‘magic’, ‘art’, ‘intuition’, ‘judgement’). This was the Creative Revolution. Others have described it as a ‘benign conspiracy’, allowing advertising to flourish without opening itself up to scrutiny.

So by the mid-1960s, the prevailing view of how advertising works – which still persists today – is that creativity is justified because you need it to attract attention to the ad, to convey a message and ensure memorability.

The final sections unpick other models of how advertising is believed to work. The first is Salience, and Feldwick relays Byron Sharp’s views on ‘mental availability’ and ‘meaningless distinctiveness’. He also talks about Social Connection – that much of communication is non-verbal, non-rational, and suggests that if you succeed in making people smile as ‘an amusing guest’ in their living room, then they might like you a bit better and buy your product. The third is advertising as Spin: PR man Edward Bernays emphasised the power of pictures and emotions rather than words and logic, and believed that a ‘product must appear to be desirable as if without the prod of salesmanship’. Finally, Feldwick talks about advertising as Showmanship. Here he dips into the murky world of P. T. Barnum – an 18th Century impresario with a real talent for getting people to talk about and visit his shows. He was the father of modern mass publicity, he believed that public attention could be achieved by creating pure ‘humbug’ – what in modern terms, we might recognise in advertising as dancing ponies, singing cats or a strong man doing the splits between two lorries.

Feldwick invites us to draw our own conclusions from the book, so I’m going to. There is a connection between Seduction and the final four areas Feldwick discusses. In fact, I don’t see them as being distinct at all, because they all rely on a relatively new way of thinking about decision-making known as System 1 judgement. They all seek to create quick, associative, metaphorical, emotional decision-making in favour of the brand they are created for, whether it be mental availability and meaningless distinctiveness (Salience), the non-verbal, non-rational theory of Social Connection, the power of pictures and emotions in Spin and the Showmanship of Barnum, who understood how to make things ‘go viral’ well before the term was even thought of.

In fact, they may not have known it as System 1 thinking, but even the practitioners of Salesmanship themselves instinctively understood it and practised it, whatever theories they espoused, and Feldwick is kind enough to point these out.

Claude Hopkins helped to launch Cotosuet (an expensive substitute for butter or lard) by negotiating a deal with Rothschilds department store in Chicago. Hopkins instructed a baker to bake the largest cake in the world using Cotosuet rather than butter and it stood as high as the ceiling in an immense corner bay window at the store. Over a hundred thousand people came to see it and police had to hold back the crowds. Was this his attempt to ‘hail only a few people only’, to act as a serious salesman, giving information only, avoiding entertainment? Or was this an attempt to drive System 1 fame for the brand?

David Ogilvy (Rosser Reeves’ brother-in-law) argued strongly in his books for Claude Hopkins’ claim-based theories, for factual copy and for headlines based on rules. Yet, he came to fame for a series of campaigns for Hathaway and Schweppes that couldn’t be further removed from Hopkins’ theories. For Hathaway shirts, Ogilvy turned up for the shoot and insisted the model, one Baron Wrangel, wear an eye-patch. 'The man in the Hathaway shirt' became hugely successful, the eye-patch was never explained, but future ads dispensed with the copy and even brand name altogether. For Schweppes, he introduced the bearded ‘Commander Whitehead’. Is this not the consummate use of System 1 non-verbal, visual communication to create brand distinctiveness?

Rosser Reeves’s agency created an ad for painkiller Anacin. It is full of information (the so-called USP is dispensed with) and the headache is dramatized by a hammer clanging against a head, only to be relieved by the pill. Most of the information is delivered by an authoritative man in a white coat. Is this advertising operating in the ‘bare and pitiless sunlight’? Or was Reeves relying on System 1 association for the success of his spot?

The evidence that advertising works at a System 1 level keeps mounting. For example,  the creation of the IPA effectiveness awards (and databank) has allowed us to establish two important facts. The first of these is that advertising works by ‘keeping your name before the public’: Extra Share of Voice (over Share of Market) drives market share. You might describe this as the quantity of advertising. The second is what our own work with the IPA’s database has revealed, that there are campaigns that drive more growth than you might expect for their level of Extra Share of Voice – that they have an inherent quality that is responsible for this greater level of efficiency. And what is that quality? It’s an emotional response and the feeling it evokes. And you can measure it to predict the efficiency of your advertising and your likely growth.

What we now know about judgement and decision-making throws a very different complexion on the question of how advertising works. System 1 is in charge, and salience and seduction is the way to reach it. Paul Feldwick has written a magnificent – and seductive! – history of the theories of advertising. Let’s embrace System 1 Humbug and leave all balderdash behind us.

To view examples of 5-Star advertising, visit BrainJuicer’s FeelMore50™ - a ranking of the top emotional ads of 2014.

This review was by Orlando Wood, MD, Brainjuicer Labs. Read more from Brainjuicer in our Clubhouse.