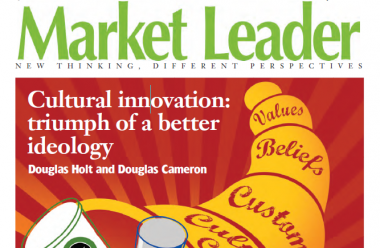 How does your brand sound?

‘MOST BUSINESSES are shooting themselves in the foot every day with bad sound … over 95% of Fortune 500 company websites are still purely visual.’ Julian Treasure’s goal in writing this book is clear: to elevate sound from being a poor cousin of muzak, or a half-hearted afterthought to being, literally, a sound and pragmatic investment in customer experience and brand growth with clear ROI.

The question we must therefore ask is simple: does Sound Business inspire and enable readers to move investment away from easier, less-controversial activities, and begin converting them into confident advocates of brand sound?

For a start, a typical busy, commercially minded reader might instinctively prefer a less comprehensive ‘what’, and a bit more focus on ‘why’. Mr Treasure’s very accessible audiovisual presentation, and many interesting and enhancing sonic examples from case studies, are available online. So if the reader struggles with the theory in this book, help is at hand.

Once through his extensive premise and arriving at the ‘how’ – the conceptual heart of the book – The Sound Agency’s consulting framework is sensible and comprehensive, and the name brand case studies generally robust.

If you already suspect that your brand might deserve a significant focus on and investment in sound, Sound Business equips you well for the fight. But often, in these brutal times, there will be a fight for budget, and it is likely that investment in more tactical, less-innovative tactics will override the more – rightly or wrongly – esoteric opportunities.

Sound Business seems best located as an underlying – and substantial – proof point for The Sound Agency’s coherent and, judging by endorsements and client references, credible offering. A book of this substance and in-depth research is a key building block in an ambitious niche agency’s development strategy. It’s apparent that Sound Business will stand the test of time and will be quoted into the future, by those who have made what remains, at least for now, a more cerebral commitment to the cause.

However, brand sound is, for now, still viewed more as ‘a bad thing that may need to be fixed’, than ‘a good thing that cries out to be leveraged’. Julian Treasure and The Sound Agency will no doubt be around to fully harvest the rewards of their vision and tenacity when the time comes.

THIS BOOK, Brutal Simplicity of Thought, brutally reveals the weaknesses, and strengths, of brutal simplicity of thought. The book is a compilation of some 50 ideas, claimed to be brutally simple ideas, which it argues have changed the world. In his introduction Maurice Saatchi says ‘Simplicity is a test… It forces exactitude or it annihilates.’ The book’s website adds: ‘Simple ideas enter the brain quicker and stay there longer.’ The opening of that sentence must surely be true, but I’m not sure about the ending.

Still, it is an attractive notion. Each example asks a provocative question, such as: ‘How did two wheels emancipate women?’ And answers that a brutally simple thought – in this case the bicycle – did the trick. Some of the examples are quite entertaining (Q: How do you keep your private parts private? A: A zip). Others would make excellent pub-quiz questions (Q: How did an Irish Pointer discover Velcro? A: An engineer called George de Mestral spotted burdock seeds getting caught in his dog’s coat, and hey presto! Velcro).

But if you examine most of the examples more closely they fall apart. The first is a truly brutal insult to the suffragettes, and ignorantly ignores a brutal fracas called the First World War. The latter two are far from simple thoughts. I never cease to be impressed by how clever both zips and Velcro are – and I’ll bet a portfolio of M&C Saatchi shares to Bernie Madoff’s Ponzi investment scheme (now that was a brutally simple idea) that Maurice Saatchi could not have invented either zips or Velcro if he lived to be 1001. And nor could I.

Everyone in marketing must applaud simplicity of thought. But in marketing, as in life, many things are brutally complicated. And insisting they are simple can go disastrously wrong. The book’s thesis is that with brutal simplicity of thought, nothing is impossible. ‘Nothing is impossible’ has been the Saatchi brothers’ marching song, because it sounds inspirational. But it led them into trying to buy the Midland Bank, and into buying the Ted Bates agency. Both moves were disastrous.

Simplicity of thought – not the brutality bit – is a highly desirable discipline in marketing. But it does not make the impossible possible.

Brutal Simplicity of Thought: How It Changed the World, preface by Lord Saatchi, Ebury Publishing, £10

I SELDOM have time to read business books end to end, so in The Innovator’s DNA, I was pleased to find that the introduction is particularly good. All the key points are made succinctly and you get the gist of the whole tome in just a few pages. And the gist is that great innovators are made, not born. All you need to do is follow five behaviours and you can become a Steve Jobs in your own right (well, almost).

This is not your typical innovation book. This is from the Harvard Business Review and is based on serious academic study. The rigour shows. I liked the professor-ish directness with which the authors lay down their ideas: ‘If you want innovation, you need creativity skills within the top management team.’ There’s no room for debate. They’ve done their research.

Clayton M Christensen, author of bestselling The Innovator’s Dilemma and The Innovator’s Solution, is the big name draw for this book with a rather dull cover. It seems, however, to be mostly written by two of his professorial colleagues, so I was worried it might lack his clear thinking accessible style. Not a bit of it. It’s cogent, readable stuff. They explain how many of the big names in business got their big ideas and they name check them frequently: Jeff Bezos (Amazon), Pierre Omidyar (eBay), Marc Benioff (Salesforce.com) and so on. The cases are relevant and fresh as they mostly come from personal interviews with these business leaders.

However, I was a little disappointed to find that their number-one case study is Apple. It is possibly the most often-quoted innovation case in history and their material is based on other books, not personal insight. It’s relevant and useful, but not as fresh and engaging as the rest. The book’s thesis is that there are five key skills to being a good business innovator: associating, questioning, observing, networking and experimenting. They rightly say that we can’t all be Steve Jobs, but they have quantified his and others’ behaviours and smartly summarised the things they all do differently from noninnovators. These are not genetically gifted talents, but behaviours that can be learnt.

Having established the five key behaviours, I found the detailed chapters on each one were harder work. Brief excitement came from some of the case studies.

However, it’s a solid, thought-provoking book, based on the interesting notion that you can be a great innovator if you behave like one.

A round-up of valuable lessons

THE FIRST advertising book I read was Ogilvy on Advertising by David Ogilvy in 1972 as a graduate trainee at the great man’s London agency, Ogilvy Benson & Mather. Apart from learning valuable lessons it struck me that an agency that has a strong point of view, expressed in a book, has a competitive advantage even if not everyone agrees with its philosophy – an agency can be very successful with a relatively small market share. It also imbued in me a career-long enthusiasm for exploring the inter-relationship between the art and science of advertising.

Being Digital by Nicolas Negroponte also had a profound effect on me with its simplicity of exposition and the easily grasped descriptions of ‘bits’ and ‘pipes’ laying a foundation of knowledge that has served me well. It led to CME.KHBB being the first agency to register its domain name, but we were beaten to having the first operational website by HHCL. That too was a valuable lesson – it’s essential to innovate continuously and provide clients with advice and support in the new frontiers of media.

Lateral Thinking: A Textbook of Creativity by Edward de Bono; I had become familiar with the concept of ‘lateral thinking’ without having actually read de Bono’s work. So, when I did it struck me that his premise – that the world was largely comprised of people who were logical thinkers, but who could become creative while

donning special thinking hats – was at odds with my observation of many top people in advertising agencies. They seemed to me to have the ability to oscillate seamlessly between linear and lateral thinking modes. This insight, backed by my many years of quizzing successful agency people, and a five-year IPA research project through Agency People, led to the validation of my ‘diagonal thinking’ hypothesis.

The Luck Factor: The Scientific Study of the Lucky Mind by Richard Wiseman contains several intriguing ideas but the one that appeals to me most is the notion that whether or not people consider themselves lucky can be correlated with other factors in their life experience. It seems that lucky people are more open, more aware of the world, and more interested in the people around them. As a result, more opportunities are either spotted or made available to them, more choices are made and often more good things happen.