Brexit, brands & the fear of the future

Brexit and the future 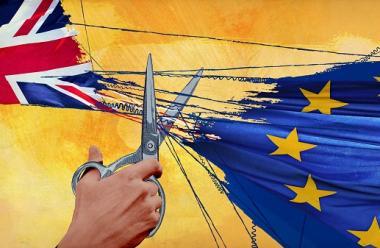 These value differences, along with the instability of the current post-Brexit political environment, have important implications for how marketers should behave and communicate with consumers. Andrew Curry and Joe Ballantyne explain.

The brexit referendum vote has already caused the pound to plummet to 30-year lows on foreign exchange markets and billions of pounds to be wiped off share values. Socially, we’ve seen racist harassment and vandalism. There have also been the first signs of what a post-Brexit EU might look like in other spheres, as British-based researchers are asked to remove themselves from collaborative EU research proposals.

But this is not just a UK issue. Markets across the globe have reacted sharply. In Spain, Italy and France stocks have fallen substantially. The Brits are Eurosceptic, but not substantially more so than many other countries in Europe – and one result of the referendum is growing pressure for referendums elsewhere. Expect the uncertainty across Europe – and the knockon effects globally – to continue.

In this article – the first of several by The Futures Company on the Brexit aftermath – we argue that the referendum revealed a deep ‘fear of the future’ among many Britons, and that this could have significant implications for brands.

We’ve written before about the deep values split across Europe and North America between an emerging generation of ‘postmaterialists’ and the existing ‘traditionals’ and ‘moderns.’ The ‘post-materialists’ are close to becoming a majority, which is always when conflict becomes most intense. The social markers of ‘post-materialists’ are that they are younger, better educated and more urban, but the values differences are more important. ‘Post-materialists’ are more likely to value diversity; ‘traditionals’ and ‘moderns’ hierarchy. There’s a revealing chart on polling conducted by Lord Ashcroft on the day of the vote that illustrates the values gap on the Brexit vote (right).

And these speak to a deep disappointment in an idea of the future, and of progress, which propelled post-war politics from the mid-1940s to the 1990s. In the UK, the 1997 election was the last in which the winning party had campaigned on an optimistic platform. “Things”, went the song, “can only get better.”

Since then, and even before, globalisation promised prosperity for everyone. But instead, while having profound effects on living standards in Asia, at home it has concentrated wealth even more sharply in the hands of the few. The internet was to be a tool of liberation, but our experience of it is as likely to be one of intrusion, a loss of privacy and a loss of control. The result is that people seek to pull up the drawbridges.

As Will Davies notes: “Among people who have utterly given up on the future, political movements don’t need to promise any desirable and realistic change. If anything, they are more comforting and trustworthy if predicated on the notion that the future is beyond rescue, for that chimes more closely with people’s private experiences.”

The notion of ‘solastalgia’ is relevant here, a word used by environmentalists for ‘the loss of a sense of belonging to a particular place and a sense of desolation about its disappearance’, even though the place is still physically there.2 In their enthusiasm for change, brands pursue the leading edge, but they need to be more alert to what it feels like on desolation row.

The list of values in the Ashcroft research represents a direct challenge to the idea of innovation. Think of it for a moment: for most brands innovation is about novelty, about progress, often about technology. It is clear that the values represented by Leavers aren’t those that welcome continual change in the name of improvement. 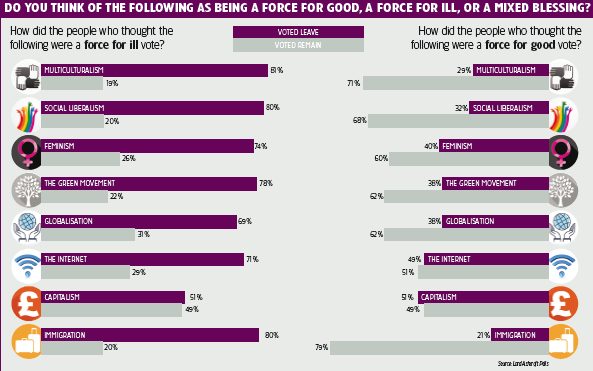 Lessons for brands and innovation

From a brand perspective, there are three lessons. First, think about how to make people feel more secure. In the wake of the financial crisis, some brands helped with financial security (car companies, for example, rolled service costs into the purchase price of the vehicle). Given the immediate economic impact of the Brexit vote, those tactics are worth revisiting. One of the immediate impacts of Brexit for the UK will be to slow growth further; recession is likely.

But second, there’s a deeper question: how to think about innovation in an age where novelty, technology and disruption are less desirable for people than continuity, familiarity and simplicity. Brands, in other words, need to help give consumers a greater sense of psychological security.

Brexit suggests the mindset should be based upon cautious innovation around simple comforts and reassurance.

British examples include the bank TSB, which focuses on the fact that it is just a retail bank, and that it lends out locally the money it takes in (even if this is over-claiming, its loans stay in the UK). The fast-food retailer Greggs, which has expanded rapidly from its base in Newcastle, offers budget snacks that are immediately familiar (sausage rolls, soups, pies) while also staying abreast of changing tastes (more salads, less sugar). A third example is the biscuit and cake company Tunnock’s, a Scottish institution that exports across the world, but which has a small product range whose packaging has barely changed in 50 years.