Brexit: Corbyn does not have a brand problem, Britain has a vision problem

Brexit: Corbyn does not have a brand problem 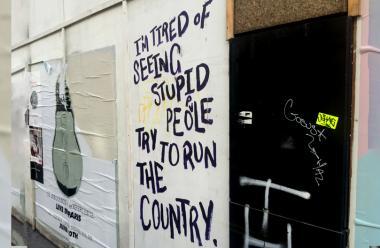 Who’s driving this juggernaut? Brexit, then Cameron goes, now a vote of no confidence in Corbyn (not to mention the England football team fulfilling its brief once more), and like the pseudo-intellectuals we are, the advertising community wades in to show how all the problems can be understood if only you come from a branding point of view.

But step back and this was inevitable. The religion of economic growth has been a terrible master for over ten years now, propped up by banks as its engine and us as its obsequious priesthood and whatever benefit there has been primarily skimmed by the Top 1%.

Whether we like it or not, when this kind of growing inequality happens, you’re heading for revolution, not a branding challenge. Brexit, Trump, Corbyn, etc. are not new brand briefs; they’re anti-brands, maybe the end of brands.
Bringing brands back in service

What we need as a result is not style guides, but a whole new vision. Something that puts the very idea of brands back in service of something people can believe in, beyond profit. What we’re suffering is not just badly executed versions of the right idea. The traditional model of holding a carrot up to the 99% whose lives have been on pause for some time has broken down. People don’t believe the old stories anymore.

Of course we are suffering the former as well. There is no apparent willingness in politics to engage properly with creative thinking nor the audience, resulting in petty battles for positioning in our mind, riven with misinformation.

Corbyn’s messages right now by protesters are: "I love Corbyn", "Strike, March, Occupy" and "Standing up by not standing up". The partisan brand message, the agenda revealing call-to-action and the meaningless end line.
No imagination

People’s distrust of political language is now almost total and it is manifesting itself in an instinctive distrust of marketing language. Both sets of language are essentially divorced from people’s real experience and need to be consigned to the bin. A vote against immigration happens when there isn’t a vote for imagination.

We need leaders who understand integrity, who don’t hide and are willing to take part and get involved. Commercial brands in the future need to do the same thing.

Organisms develop through being challenged. Marketing and politicians need to use this to demonstrate integrity and a willingness to make the world a better place. Anything else is expensive and self-destructive. Without it, stranger things will continue to happen.