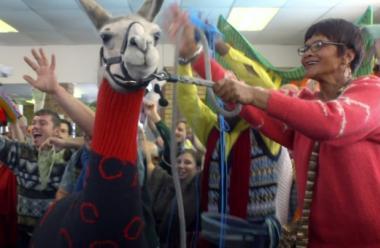 In my ongoing search for great examples of experiential marketing, I very often come across great brand experiences from Coca-Cola.

Only a few weeks ago I wrote about Coca-Cola’s Valentine’s campaign on the BEcause blog - but this week, the hilarious Coke Zero prank which makes use of a remarkable amount of enthusiastic brand ambassadors and the equally as hilarious Coca-Cola Slurp! cinema stunt which pokes fun at its customers have really caught my attention.

Fishing, pétanque and knitting are all fairly docile past-times. That is, until a horde of people show up out of the blue cheering you on to land the biggest fish, to throw the closest boule, to knit the prettiest pattern. 6 spectators become 60, and 60 quickly become 600, turning the unsuspecting protagonists into idols while supporter madness breaks out around them. Take a look at the fun video:


The premise of the fun campaign is that everything is better when you add zero. Nice!

The slurpers were secretly filmed in the cinema foyer and superimposed into the steamy pre-movie short. 'Please keep quiet during the movie' the end-line says. 'It’s not the same with you in it.'

This is another clever idea from Coca-Cola - interactive, sharable, relevant, fun and best of all contextual.

With these cheeky campaigns, Coca-Cola once again confirms its place as trailblazing experiential marketer and shows that it’s OK to poke fun at your customers when it’s done right.