The concept of ‘choice architecture’ was given considerable traction by the 2008 bestselling book 'Nudge' by Cass Sunstein and Richard Thaler. Thaler and Sunstein, who first coined the term, explain how our decisions can be shaped by the context in which choices are presented to us, where subtle differences in the design of the decision-making context or in the environment around us can have a significant impact on the decisions we make.

This means we can shape people's decisions by designing the environment in which we make choices in certain ways using tools like setting defaults and framing. For example, researchers have found:

Yet choice architecture is a very broad concept for which greater definition and clarity could ensure it is applied effectively and consistently.

A new choice architecture framework
Gareth Hollands and his colleagues at the Behaviour and Health Research Unit at the University of Cambridge took on this challenge and have recently developed a new, more detailed definition of choice architecture, identifying two classes:

Their refined definition of choice architecture incorporates these two classes:

“Choice architecture: Interventions that involve altering the properties or placement of objects or stimuli within micro-environments with the intention of changing health-related behaviour. Such interventions are implemented within the same micro-environment as that in which the target behaviour is performed, typically require minimal conscious engagement, can in principle influence the behaviour of many people simultaneously, and are not targeted or tailored to specific individuals.”

Using this definition the researchers have developed a more concrete framework (see below) identifying nine tools through which we can shape the decision-making context. Concepts from behavioural science can then be slotted into this framework. For example, framing or authority bias could fit into labelling. Salience plays a role in presentation and ambience. 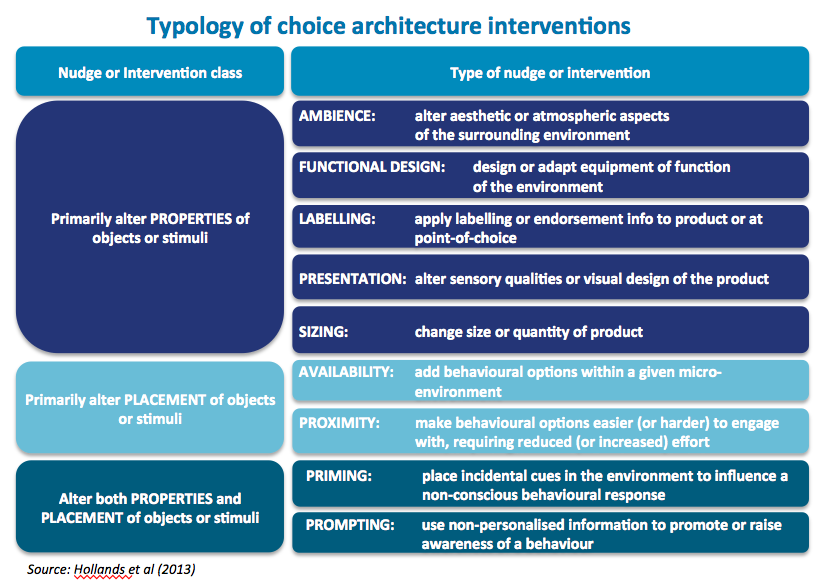 This is a very accessible framework and means that anyone can work through and think how they might redesign an environment to better shape decision-making and behaviour just thinking about properties and placement.