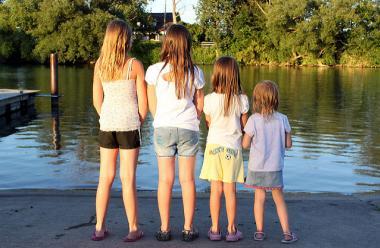 If you're sharing a cab to the airport with a stranger, what happens if he's two inches taller than you? Probably nothing. There's nothing to distract, or to cause discomfort. You make small talk.

What if he's a little shorter than you? Or left handed?

Perhaps he's not from your town, but from Depew, about twenty miles away. Probably nothing to consider...

What if he has shoulder-length red hair?

At some point, most people reach a moment of discomfort. What if he's 7 feet tall? Will you mention it? Or if he's under four feet? What if he's from a different country? Or a different race or speaking with a significant accent (or, more accurately, an accent that's different from yours)?

For as long as we've been keeping records, human beings have been on alert for the differences that divide us. Then we fixate on those differences, amplifying them, ascribing all sorts of irrelevant behaviors to them. Until, the next thing you know, we start referring to, "those people."

It seems as though it's a lot more productive to look for something in common. Attitudes and expectations. Beliefs in the common good and forward motion. A desire to make something that matters...

Because there's always more in common than different.