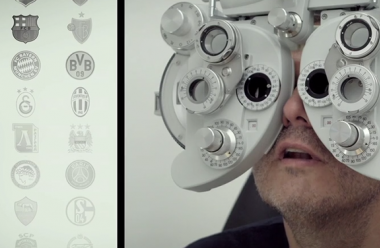 To no surprise at all, one of Brazilian men’s favourite past times is watching football. But what if problems with their vision prevented them from enjoying it?

Another key fact about Brazilian men is that they don’t have their eyes tested regularly, and more than half of them think their vision is just fine. In fact, about 25% of the Brazilian population have problems with their eyesight.

So ESPN, the cable and satellite television channel that prides itself on being The Worldwide Leader in Sports, didn’t want any of their viewers to miss out on their offerings from poor eyesight.

To tackle this problem and persuade them to get their eyes tested, the channel created a special test for Champions League fanatics that replaced the usual letters and numbers with global soccer stars and clubs of UEFA Champions League.

An ESPN Eye Test van, equipped with an optician and his equipment, drove around offering vision tests for sports fans. Instead of squinting to read the usual boring rows of letters and numbers, they had to correctly identify photos of soccer players and teams.

The tests were also integrated onto interactive billboards and onto a microsite where they could be taken using a webcam.  In both cases, participants had to keep a certain distance from the camera and follow a step-by-step test. A voice recognition system registered the responses and told them if their vision was fine, or if it was best that they visit an optician before watching the next UEFA CHAMPIONS LEAGUE games.

Any football fanatic would jump at the chance to attest their knowledge of the Beautiful Game, so this was a great idea from ESPN who demonstrated good knowledge of their target audience. And I just love the idea of transforming a necessary but uninspiring activity into something fun and memorable. The incorporation of fun activations into the simplest of everyday tasks is seemingly an increasing trend; take a look at Red Cross’s arcade game donation box for example.