Green & Black's take a niche brand into the big league 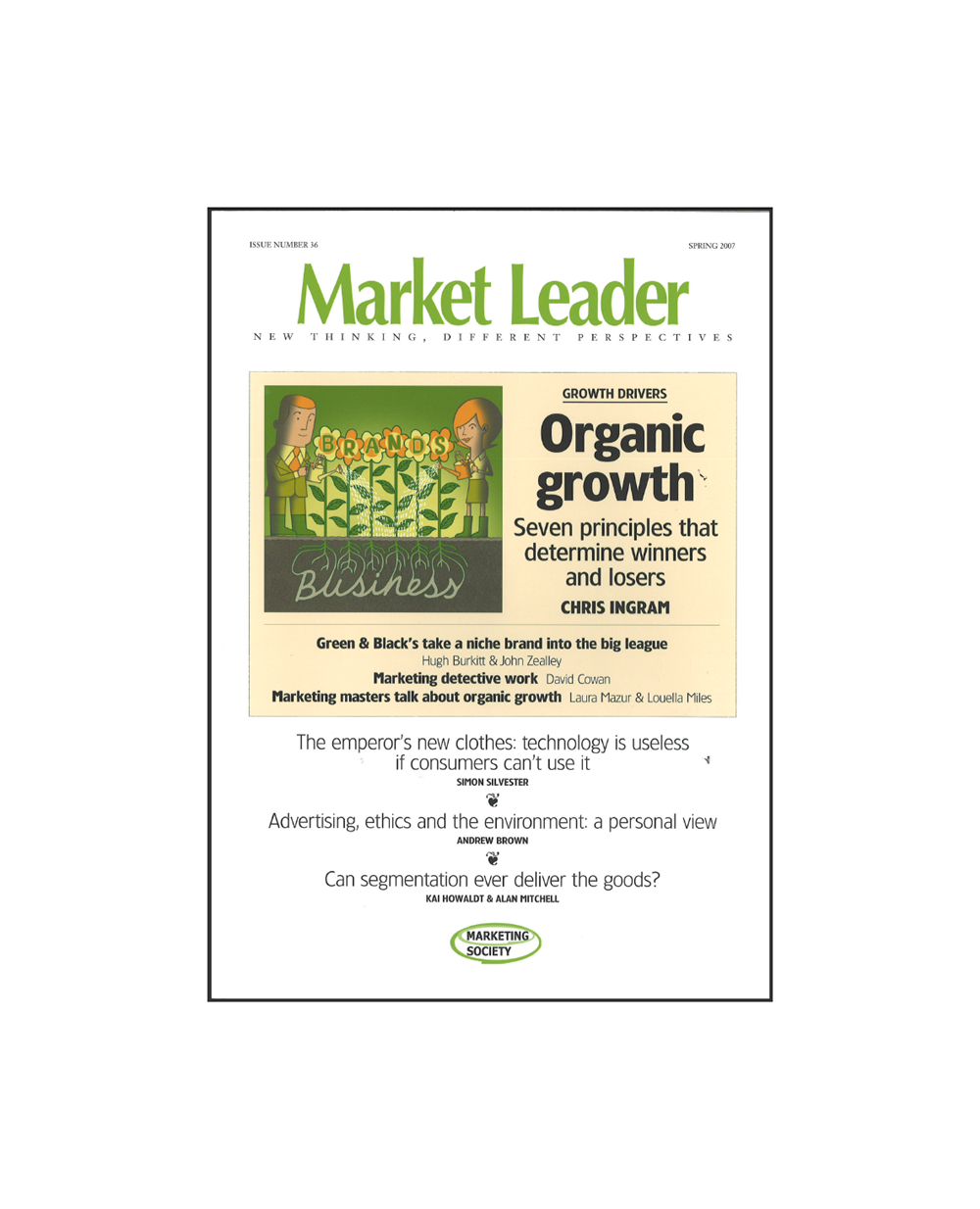 The company attributed this success to the brand positioning of intense, darker chocolate, which was embraced and communicated by all the brand's stakeholders. This was underpinned by applying the positioning consistently through a very select number of marketing disciplines in the earlier days to reach the right audience at the right time on limited resources.

This strategy has enabled the brand to compete successfully against much bigger, established players in the market and it is one of the reasons that, by May 2006, it commanded a 7.4% share of the UK block chocolate market. In 2005 it was acquired for around £25 million by global confectionery group Cadbury Schweppes.

Green & Black's chocolate was launched in 1991 by a husband and wife team. With its bittersweet cocoa taste and organic credentials, the chocolate had instant niche appeal, but never progressed beyond a 1% market share. It was viewed by supermarkets as a limited offering, with organic as its primary selling point. With the arrival of new management at the end of 2002, Green & Black's set out to do the following.

Reposition the brand from worthy organic to luxury premium chocolate (leading on taste with organic as a supporting, rather than a primary reason to purchase).

Operate in the premium sector, an emerging market with intensifying competition.

Create desire for dark chocolate in a milk chocolate-dominated market.

The UK chocolate market is largely stagnant, with annual sales growth of just 0.5% in 2005. It has been dominated by long standing brands with big advertising and promotional budgets such as Cadbury, Masterfoods and Nestlé, and there has been little room for volume or value growth for even the bigger players.

Competition in the premium end of confectionery has also intensified in recent years with Lindt, Guylian, Tesco's Finest and Sainsbury's Taste the Difference entering the arena at the same time as Green & Black's. In addition, brands such as Thorntons are supplying their products to supermarkets for the first time. As such, transforming Green & Black's – a low-profile brand with a small marketing budget – into a leading contender has been an extraordinary feat.

Up until the end of 2002, Green & Black's had not carried out marketing activity of any real weight, but had built the brand by passionate word of mouth from a very loyal customer base. These consumers had in effect 'discovered' the brand for themselves and were not only buying into the product taste, but were true believers in the brand story of organic and fair-trade credentials.

The vision, therefore, was to take this small brand with its very loyal, passionate consumers and grow it. At this time the brand was known mainly for its organic credentials, but the trend towards eating more organic foods was in its infancy and many people still wrongly perceived that by choosing organic chocolate, they would sacrifice taste.

Based on an analysis of current buyers, two specific audience groups were identified: time poor, food rich (young affluent urbanites) and everyday luxury (home counties mums). These were seen as offering the greatest potential for Green & Black's because taste and quality were important for both groups. Positioning of any communications therefore focused on these two messages. The long-term marketing strategy, developed in conjunction with its strategic communications agency Brave, was to reflect the experience of the Green & Black's early adopters, and the way in which consumers are introduced to brands by experiencing them in their social circle.

The company set out to encourage and escalate this type of word-of-mouth behaviour that built the brand in the early days, resisting the temptation to 'push' communications at them. The Green & Black's brand has an interesting story to tell consumers, and the company's key role is to retain interest and passionate advocacy from the early adopters while allowing new consumers to feel they are discovering the brand for themselves (see Figure 1).

One of the first applications of the marketing strategy came towards the end of 2002, when the company rolled out a new packaging design that placed the intense, darker chocolate positioning at the core. The dark brown and colour bands clearly communicated intense flavour first, while the gold typography acted as a cue to the brand's premium status. It was an image that created desire and encouraged consumers to pick up the product and try it (see Figure 2).

Once the packaging reflected and complemented the quality of the chocolate more fully, the next task was to ensure the product was seen and tried by new consumers in the defined target audience groups. Sampling and experiential activity were the primary marketing techniques in 2003 and into 2004.

The aim was not simply to sample, but to achieve a 'Green & Black's' moment by reaching consumers and engaging with them in appropriate social situations. The primary focus was to maximise the attention given to consumer interaction with the brand and make consumers feel 'selected'.

Brand partnerships were formed with a range of aspirational third parties, with bespoke activity tailored according to partner as in the following examples.

PR has been a key element of the Green & Black's strategy, creating endorsement for the brand and increasing word-of-mouth communication. By seeding various elements of the Green & Black's story in various publications, from food to lifestyle titles, the brand has enjoyed unprecedented levels of editorial coverage. Evaluation of the 2005 campaign alone showed 746 pieces of coverage, of which 98% were favourable.

On the back of the pack redesign and the focus on getting people to discover the brand in 2003–2004, sales started to climb, with an increasing number of customers tasting the brand through the trial activation programme and store-level marketing.  In order to win greater awareness and reach, the brand then made its first foray into advertising in autumn 2004.

On a limited budget of £500,000, the company ran a combination of national press advertising and ads on the London Underground. The Underground ads reflected the London/south-east bias for the brand (see Figure 5). Quality press titles were selected because they would reach the key audiences identified by the company, and give the company the chance to attract them with the Green & Black's story.

The ad campaign self-confidently proclaimed the chocolate's 'darkness', despite the fact that the majority of chocolate consumers expressed a preference for milk chocolate. It reflected the feelings of existing consumers towards the brand, as well as positioning it to new users as a darker, more intense chocolate (see Figure 6).

Also, by introducing only one product/variant in each execution, and being very selective with the titles chosen, Green & Black's felt that consumers could still feel they were 'discovering' the brand for themselves. Different copy for the Underground and the press increased the engagement and relevance of the advertising in the context in which it was seen.

The campaign succeeded in raising both national awareness and, more importantly, sales. In the 12-week period to 1 January 2005, yearon- year the sales value increased by an eye-opening 72% – impressive results in a sector growing by just 0.5%

On the back of such impressive sales figures, the marketing budget was increased to £2 million in 2005. The original strategy of trial activation, brand partnerships and PR remained, but the company continued to raise brand awareness with larger-scale press advertising campaigns.

The advertising campaigns continued to use consistent art direction and copy style, and to support an accelerated range extension strategy. New products and tactical executions were introduced at key/relevant points in the calendar to capitalise on the key sales peaks in the year. In terms of the media schedule, the company was very aware of and focused on the relationship and dialogue developed with readers of a title over time. Executions and bespoke activity with any one title were built on what had been done previously.

Press was used in an increasingly creative way during the autumn of 2005. With agency partner Brave, an integrated media plan was developed with a core schedule of executions as well as innovative uses of space, with a heavyweight spike during the campaign to 'celebrate' the end of British summer time on 30 October: 'the days are getting darker'. The campaign rebutted the negative perceptions of putting the clocks back by highlighting the extra opportunities to enjoy nights in and indulge in the brand's darker, more intense chocolate.

Invoiced sales rose from £4.5 million at the end of 2002 to £29 million by 2005. It became the fastest-growing confectionery brand in the UK with an annual growth rate of 70% in a sluggish sector (see Figure 7). By May 2006, Green & Black's commanded a 7.4% share of the UK block chocolate market. Before the marketing initiatives carried out between 2003 and 2005, the share was under 1%. During this time, the brand's best seller, the 100g dark 70% chocolate bar, overtook the best seller of its closest rival, Lindt.

The breadth and appeal of the Green & Black's brand enabled it to evolve from its original base of health food stores through to some of the highest-profile food retailers in the UK. The brand now had real diversity in distribution, from Oxfam and Tesco to Harrods and Selfridges. Moreover, between 2003 and 2005 the frequency of purchase increased from 2.7 to 3.4, and the average selling price rose from £1.19 to £1.54, which meant consumers were not only buying more but paying more.

This combination of the decision at the end of 2002 to focus on the darker, intense flavour of the chocolate rather than its organic heritage, engaging extensively with consumers and running an effective and carefully calibrated marketing communications programme helped successfully transform the brand from a niche, worthy organic positioning into luxury premium chocolate.

Green & Black's was born in 1991, when Craig Sams, founder of Whole Earth, the pioneering organic food company, and his wife, environment columnist for The Times Josephine Fairley, made the world's first organic chocolate. It was a high-quality, bittersweet dark chocolate bar, packed with 70% cocoa solids.

By 1999, the company was ready to move to the next stage. A new set of investors took a stake in the business, led by William Kendall, formerly chief executive of the Covent Garden Soup Company, a pioneer of fresh soup. Over the next 18 months a new management team was put in place, including Mark Palmer as marketing director, who had previously been marketing manager of Burger King in the UK. This was a formidable combination of professional management and the brand's distinctive personality.