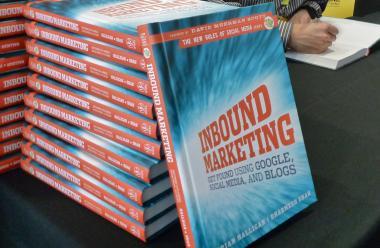 In 2005, one year after the launch of Facebook, but twelve months before the first tweet, HubSpot’s co-founder Brian Halligan coined the buzzword inbound marketing. By 2009, the phrase was neck-and-neck with content marketing in Google search volume, fuelled in part by the popularity of the book of the same name written by Halligan and fellow co-founder, Dharmesh Shah.

In the intervening six years, content marketing has become the dominant expression, and HubSpot is the dominant player in the category of all-encompassing online marketing platforms that it created.

It’s unsurprising then that today, given their huge installed base of over ten thousand customers, marketers still look to Halligan and Shah for leadership and inspiration.

When 'Inbound Marketing' was originally written, HubSpot aimed to serve the needs of the small business. However, the company has since moved most of their attention to larger clients - the average spend per customer grew by 80% between 2010 and 2013. This new release represents the first revision of ‘Inbound Marketing’ since this strategic change in HubSpot's business. But is this update still relevant to the marketer of today?

HubSpot's own positioning, and the world of marketing, have changed in six years. Sadly, the content presented in 'Inbound Marketing' has not. As a consequence, this revision is somewhat of an anomaly.

Squarely aimed at the inbound marketing beginner, the authors walk the reader through buying a domain name, setting up a blog, and establishing basic social media profiles. These are rudimentary topics that have been covered ad infinitum in countless other (and better) guides.

Given that the structure of the first edition was built around the needs of the small business owner, and that SMEs no longer represent HubSpot's target clientele, there appears to have been little commercial imperative for the authors to significantly update the text for this new edition.

For example, Barack Obama’s 2009 presidential campaign is held up as an example of inbound marketing best practice, although much of the online marketing tactics described (email, text messaging) are outbound. A better example should have been sourced for this revision.

In addition, the authors suggest keyword optimisation of anchor text to improve SEO results, today a widely discouraged practice, as well as advocating the use of Flip cameras to create online video content, even though Flip ceased production four years ago.

Yet the problems with this new edition don’t end there. Shah and Halligan encourage the reader to use Google Analytics to identify the organic search keywords prospect's use on Google to find their website, something that hasn't been possible on any scale since the ‘Not Provided’ obfuscation of Google keyword referral data in 2011. Guest blogging is also recommended, a tactic now in decline due to conflicting advice from Google on the value of links obtained using the method.

What is more frustrating is that throughout the book there are glimmers of the genuinely useful; that LinkedIn allows you to send email messages to group members using their widely trusted domain name, bypassing spam filters; that StumbleUpon has a cheap and underused social advertising platform; that online tools are HubSpot’s best source of leads; that successful marketers create content for prospects who are at different stages within the buying cycle; that a focussed landing page can produce fifty times the results of a cluttered page; that following a process of lead grading can help you uncover your most valuable prospects. Not groundbreaking, but helpful.

However, the rather basic content at the start of the book will likely mean that the average marketer will choose to put down 'Inbound Marketing' before they come across anything useful, never to return.

Yet, a more practical book on content marketing already exists. In The Science of Marketing, HubSpot’s former social media scientist, Dan Zarrella, assumes his reader already has a fundamental understanding of online marketing, and instead packs every page with statistics and empirical data. Zarrella uses Hubspot’s enviable dataset to provide the kind of actionable insight that other authors promise yet fail to deliver. Read in tandem, the book written by his ex-employers is arguably the poorer cousin.

In conclusion then, if the latest version of 'Inbound Marketing' represents the best that the founders of HubSpot can produce in 2015, then book-reading marketers (which should be all marketers) may need to start to look elsewhere for leadership.

John Newton is the author of the Small Business Trends Management Book of 2015, ‘Nurture’.

Read more from John Newton in our Clubhouse.