The inexorable rise of brand response 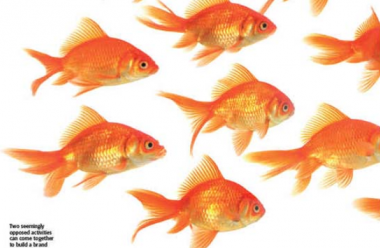 Communication campaigns traditionally have been divided between two types of activities: ‘above the line’ brand building and ‘below the line’ for gaining immediate response. Increasingly these activities are being coherently designed to deliver business results. Drawing on the IPA Databank, Neil Dawson describes examples illustrating the effective integration of these two types of activity

In the book Built to Last, Collins and Porras talk about how companies get caught in what they call ‘The Tyranny of the OR'.This is the belief that you cannot live with two seemingly contradictory ideas at the same time: you can have change or stability, you can be either conservative or bold, you can have low cost or high quality, but you can never have both.

They found that successful, visionary companies all operate in what they call ‘The Genius of the AND', driven by the ‘ferocious insistence’ that they can and must have both at once.

Marketers and their agencies have long been caught in their own ‘Tyranny of the OR’ as they have wrestled with how to achieve the right balance of brand-building and response-driving tactical activity within campaigns. Terms such as ‘theme and scheme’ or ‘strategic promotions’ have been variously used to describe this ongoing challenge.

Brand Response is the marketing communications industry's Genius of the And. It sounds too good to be true. It asks us to live with two apparently contradictory ideas at the same time. It can be defined simply as a strategic and executional campaign approach where brandbuilding drives response and this response in turn builds the brand in a virtuous circle of effectiveness.

Analysis of the IPA Databank shows campaigns with Brand Response characteristics becoming a force in the 2000s, with this trend set to continue. This has had significant implications for strategy, creative, media and evaluative approaches. While this may risk oversimplification, marketing communications seems to have moved through three distinct phases in the lifetime of the Awards.

Marketers make a choice between two discrete activities. Brand-building and other longer-term activities are separate from short-term sales or response-driving activities. They are generally delivered by different campaigns through different channels. Typically TV is used for ‘brand’ and direct marketing used for ‘response'. The majority of the IPA cases from the 1980s reflect this thinking.

The two elements are treated as distinct but complementary activities within a campaign helped by some executional links. The Grand Prixwinning Tesco case of 2000 used Every

Little Helps, and a consistent tone of voice across different campaigns for brand and tactical work.

A seamless blend of both types of activity is delivered through a single campaign. The purpose of all activity is to drive response (both short and longer term) while building the brand.

Building brands and driving sales are no longer mutually exclusive activities: they are now symbiotic. Critically the two elements create a powerful virtuous circle where brand helps build response, and the response itself helps build the brand through experience. The rise of Brand Response can be clearly seen from analysis of the types of campaign by decade (see Figure 1) using the new IDOL tool (IPA Databank online http://idol.ipa.co.uk/).

Brand response is not exclusively a 2000s phenomenon. There were significant portents in the 1990s – the definitive case being Direct Line and the famous red telephone. At the time it was regarded as being a sector-specific success rather than a broader breakthrough in approaches to marketing communications.

The growth of Brand Response has been fuelled by multiple factors. Since the mid-1990s the expansion of the internet has disrupted the business models of existing sectors and created new business sectors such as aggregators.

The ability to model and measure consumer ‘response’ has increased dramatically and continues apace. The commercial value of this ‘response’ remains a matter of continuing debate.

Most businesses now operate in a relentlessly short-term environment. Daily, weekly and monthly targets are the norm; the quarterly report has for many become a long-term perspective.

The downward pressure on marketing budgets of the past decade means that marketers simply cannot afford to divide the Brand and Response tasks in the way they used to. Consumers have become more ‘responsive'. It is easier than ever for them to engage with relevant marketing campaigns. They are more willing than ever to respond to the right offer.

Social networks have created new opportunities for response in the form of participation and comment without invitation from brands.

Over the past decade, the marketing communications industry has consistently promoted the value and virtues of joined-up or integrated thinking and execution.

Setting aside well-documented interdisciplinary turf wars, this has created an environment where Brand Response has been likely to flourish.

Three of the best examples of Brand Response follow. Interested readers are invited to download the full papers at www.warc.com. The accompanying commentary is intended to show how it demonstrates a Brand Response approach.

Each one approaches the task from both a strategic and executional perspective. And in each case there's a powerful demonstration of the virtuous circle where brand aids response, and the response itself is part of the brand-building relationship.

This is the story of a corporate transformation from ‘troubled’ Cellnet to thriving O2. The new brand was launched into a mature and ferociously competitive market. It faced the significant challenge of building a brand while gaining short-term sales as quickly as possible. More than 80 per cent of investment was sales-driving. The paper describes how O2 adopted a brand-centric approach to all activity.

Integration was delivered at two levels: visual – to deliver cut-through which helped drive awareness and led to efficiencies; and strategic – to deliver product and tactical propositions such as Pay and Go, Bolt-Ons and Home, which successfully drove sales and longer-term consideration. Econometric modelling shows a short-term payback of 6.3:1 and an ultimate payback of 62:1.

What's so impressive about the case is the speed at which the results were achieved. Significant savings were delivered by the rapidity with which O2 established itself in the market. No other brand achieved its goals as quickly or as cost-effectively during this period. In just two years O2 became the most salient brand in the market.

Importantly strategic and tactical propositions created a brand-building experience – Pay and Go, Home and Bolt-Ons completed the virtuous circle of brand response by being distinctive and relevant to the consumer.

Salisbury's is a significant example of a campaign evolution into a Brand Response model.

Previous successful campaigns had featured Jamie Oliver and the famous recipe cards. The new strategy was founded on a clear definition of the business problem – a target of £2.5 billion extra sales was translated into £1.14 extra per shopping trip.

Try Something New Today was created to interrupt ingrained shopper behaviour and drive incremental purchase. The idea has since guided all communications, store design, merchandising, product innovation and company culture. It works with Jamie Oliver in TV ads and on the recession-busting Feed Your Family for a Fiver initiative in-store.

Significantly, the idea of Try Something New Today was not simply about building brand while driving purchase. The experience of creating and eating something new is a brand-building experience from Salisbury's in its own right.

The total effects of this campaign are £1.9 billion incremental revenue over two years. Of particular note is the modelling proof, which highlights the value of the Try Something New Today idea at £550 million in increased revenue. In other words, the initiative led to behaviour change unrelated to media spend which had a huge impact on sales (see Figure 2).

The deregulation of directory enquiries does not seem like an inspirational subject, yet the cult-like phenomenon of the runners propelled an unknown brand to market leadership and public affection in a short time.

The task of driving immediate calls and building a distinctive and motivating brand could not be divided. As well as creating a famous brand, response was key to building the brand via behaviour and ingraining a new directory enquiries habit.

A bold strategy included spending £2 million of the marketing budget on getting the so-called ‘golden double’ of 118 118 and beginning to advertise several months ahead of switch-off. This delivered 17 million calls at a time when there was no reason to call 118 118 other than the communications campaign.

The campaign idea was amplified by innovative media approaches which made the runners and their ‘Got your number’ catchphrase part of popular culture – appearing on Question of Sport, even celebrating the retirement of the elderly 192. The runners became the poster-boys for all journalistic coverage of the deregulation issue, bringing high engagement to this dull subject. 118 118 thus owned a new category.

Post switch-off 118 118 dominated the market and charged a significant premium versus competitors. Market share rose to 44 per cent compared with long-established BT's 34 per cent.

So we have seen that Brand Response is a significant theme of the IPA Effectiveness Awards in the 2000s. Two apparently contradictory elements have been united in some of the most effective campaigns of the past decade.

Brand Response is highly relevant to retailers and service brands where the consumer experience is critical in fuelling brand perceptions. However, sectors such as fmcgs are not immune – the recent Walkers ‘Do Us a Flavour’ campaign seems to be inspired by its principles.

F. Scott Fitzgerald once said that the test of a first-rate mind was the ability to hold two opposing ideas at the same time and still retain the ability to function.

Successful marketing communications in the 2000s passed this test as it increasingly embraced Brand Response. There is no sign of this trend abating.

Neil Dawson is the founder of Hurrell Moseley Dawson and Grimmer.