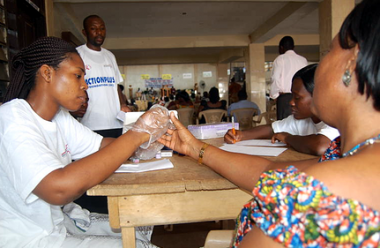 Several times a year, groups of charities and volunteers meet in a Speedmatching event, moving round the room to find someone with the skills to match a need.  It’s a hopeful stab in the dark for all the participants.

At one of these events in the autumn of 2013, Pastor Fred Annin, who runs a small charity in London ‘ActionPlus Foundation’, sought help with a PR campaign to lower the rate of HIV amongst the black African community in the UK, which is 30 times higher than the rest of the UK population. Pastor Fred met six media professionals at that session and chose former BBC journalist Ruth Peacock as the match.

The ‘Take Action Now’ campaign pushed the message through churches, combatting the stigma attached to HIV, which prevents people from coming forward for testing for fear of being thrown out. Pastor Fred wanted to challenge prejudice and set up HIV testing centres in churches.


Ruth used her contacts and knowledge of how the media works to get the story published widely over two weekends in November and December 2013. She fixed interviews on BBC Radio 4, BBC Radio 5 live, BBC London TV and radio, 6 BBC local radio stations and Premier Christian Radio. The story ran in the Independent newspaper, the Voice and the London Evening Standard and, through PA, in 143 local papers throughout the UK. News of the campaign then sprang up on 28 online news agency websites including ITN, 8 international press sites, the Baptist Times, the Church Times and on 5 church listings pages.

The story brought the biggest UK wide publicity for the work of the ActionPlus Foundation, which will build on this to expand its work. Pastor Fred said 'Ruth was such a special blessing to the organisation and through her dynamic influence on the media was able to bring us out of obscurity to the lime light. The PR has given us a bigger platform in the media for our exposure.’

The clinicians who did HIV testing in a church clinic said they had unprecedented demand for testing at subsequent clinics nearby, thanks to the local publicity. So the campaign may just have saved lives.

Media Trust partner our Marketing for Good initiative, along with Pimp My Cause and supported by The Ideas Foundation, this collaboration offers tangible opportunities for our members to get involved and make a difference.