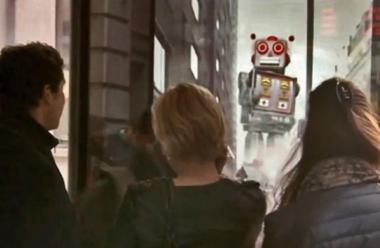 People waiting at a bus stop on London’s New Oxford Street started seeing things: from tentacles rising up from the sewers, to a giant robot stomping in the distance.

The bus stop side screen which appeared to be made of glass was actually a digital screen adding additional animations onto the mundane surroundings. From a meteorite crashing into the glass, to UFOs appearing in the sky, this video advertisement for iconic drinks brand Pepsi is out of this world.

This stunt, which is part of their ‘Unbelievable’ campaign, was an impactful experiential marketing campaign which made the most of augmented reality technology.

With the animations including a person falling from the sky and clinging to a bouquet of helium balloons, and a Bengal tiger on the prowl, this advert goes to show the huge potential new technology has for engaging potential customers though brand experience.

As another part of their ‘Unbelievable’ campaign PepsiCo also encouraged people to send in 6 second Vine videos of the most unbelievable thing they had done using the hashtag, #LiveforNow. This landmark social media campaign was widely reported on due to its innovative involvement of the consumer.

What I particularly like about the ‘Unbelievable’ bus stop is the way PepsiCo has created almost ‘live Vines’ through the fleeting moments experienced at the AR bus stop.

This Pepsi campaign is a great example of innovation in advertising, and could give arch nemesis' Coca-Cola’s recent bus stop ad a run for its money.

I’m no stranger to stand-out bus stop campaigns and on the BEcause blog we recently covered Duracell Moments of Warmth, a campaign where people needed to hold hands to connect a circuit that powered overhead heaters.