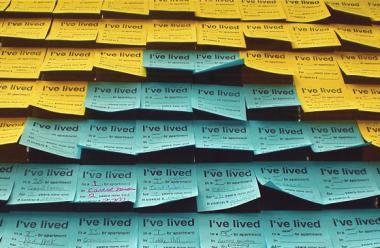 Real estate revealed...it’s a question many residents wonder: how much are my neighbors paying for their places?

Post-it Notes for Neighbors is an interactive installation that helps demystify the topic by inviting people to anonymously share information about their housing costs.

Inspired by Illegal Art’s To Do, Candy covered a Brooklyn storefront window with Post-it notes stamped with specific fill-in-the-blank forms, so neighbors and passersby could fill in a note with their own apartment information and marvel at the high and low numbers paid by others.

By the end of the week, the window was transformed into a useful collection of housing information created by and relevant to our community.

This project was part of the 2008 public art exhibit Windows Brooklyn and displayed on vintage furniture shop Yesterday’s News at 428 Court Street in Carroll Gardens. More on the results below.

All post-it notes on final day.

Post-it notes whittled down to ones with responses (half of total).

After the week-long installation it was a pleasant surprise that:

What a fun and easy way to collect neighborhood info

Nearly half of responses came from people living in their apartment for 2 years or less – a reflection of the temporary-ness of many New Yorkers/renters? The winner of Cheapest Apartment goes to someone living in a studio in Carroll Gardens for 43 years that costs $146/month (!) And the Most Expensive goes to someone in a 4-br in Cobble Hill for 4 years that costs $3,720/month.

A few lifers are getting good deals, but it seems like some costs have caught up with time. Candy printed “cost(s)” on the notes to invite input from both renters and owners, but the responses were mostly from renters. Now she sees that she still botched the wording – most Brooklynites buy complete brownstones/houses rather than apartments.

The only owners who responded were people who she met while tending to the project. One man has lived in a two-apartment house in Carroll Gardens for 30 years and it cost him only $125,000 (it’s worth $3 million now).

A woman named Deborah bought three homes in Bed Stuy from 1988-2003 and never paid more than $250,000. They put her two sons through college and will allow her to retire early. “Like they say,” she said, “they’re not making any more of it. Get yourself some real estate!”