Small people in a big world: the liberating power of perspective

Small People in a Big World 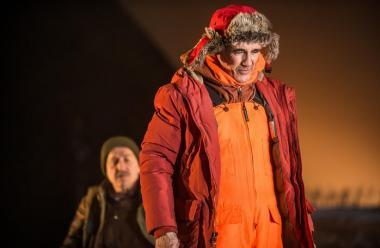 I recently saw Nice Fish, a fine play by Mark Rylance and Louis Jenkins (Harold Pinter Theatre until 11 February). It features two friends ice-fishing on a frozen lake in Northern Minnesota. They speculate on love and death; on petty officialdom and the aesthetics of baloney; on age and the environment; on the romantic yearnings of snowmen and the difference between wolves and dogs.

‘Some days are so sad nothing will help, when love has gone, when the sunshine and clear sky only tease and mock you. Those days you feel like running away, going where no one knows your name. Like slinging the old Gibson over your shoulder and travelling the narrow road to the north where the gray sky fits your mood and the cold wind blows a different kind of trouble… But somebody, someday soon, somebody will come and put up a bed and breakfast and a gourmet coffee shop. There is only one true wilderness left to explore, those vast empty spaces in your head.’

Some have complained that the play lacks any real drama or strong narrative. They have criticised it for whimsy. But there’s a fine line between whimsy and wisdom. I found many of the fishermen’s observations insightful and moving.

‘One day you cross an invisible line and everything is changed…It is as if you had crossed the international dateline, all at once it’s another day. Now, everything you looked forward to is suddenly behind.’

At the start of Nice Fish we see spruce trees and poplars in the distance; brightly painted fishing huts. We see a small figure with a fishing rod. A truck traverses the horizon. A train passes along the shoreline. All this is magically conveyed with puppets and miniatures. The stage design has the effect of placing our characters in the context of a grand panorama. And in many ways this is a play about scale: of ‘little’ people having big thoughts; of the intimacy of the trivial and the profound; of the beguiling mystery of the unknown and unknowable.

‘I’ve spent a great deal of my life fretting over things that most people wouldn’t waste their time on. Trying to explain something I haven’t a clue about.’

We are indeed small people in a big world. We are drops in life’s ocean, tiny stars in an infinite galaxy. On occasion I have felt this intensely: in a taxi late at night driving through Sao Paolo; flying over an unending Mongolian mountain range; walking into Canary Wharf on a Monday morning. It’s easy to be overwhelmed.

But perspective can be liberating as well as humbling; inspiring as well as chastening. Perspective supplies a sense of wonder. And keeping things in proportion is critical to our understanding of the world; to our empathy with other people; to our emotional wellbeing.

So much wrong in business, and indeed the wider world, derives from poor perspective: the excessive demand, the unreasonable request, the disproportionate response, the asymmetrical power balance. So much stress seems unwarranted; so much angst seems inappropriate. So many of our leaders, brands and businesses have an enhanced sense of self worth, but a diminished sense of reality.

Often we get too close, too involved, too exercised. Our passion turns to obsession, our determination to compulsion. We behave as if it’s a matter of life and death, when really it’s a matter of deodorant and fried chicken.

If we want to retain our relevance, to sustain our sanity, we would all do well to step back and abstract ourselves occasionally; to broaden the frame of reference; to take on different viewpoints. Context ‘has charms to soothe a savage breast.’ Let’s set aside the corporate hubris and embrace a little humility.

At the end of Nice Fish the two lead characters reach some kind of conclusion. They observe that old people leave life with the same befuddlement as if it were a movie:

‘”I didn’t get it.”…”It didn’t seem to have any plot”…”No, it seemed like things just kept coming at me. Most of the time I was confused…and there was too much sex and violence…Violence anyway”…”It was not much for character development either; most of the time people were either shouting or mumbling. Then just when someone started to make sense and I got interested, they died. Then a whole lot of new characters came along and I couldn’t tell who was who”… “The whole thing lacked subtlety”…”Some of the scenery was nice.”’