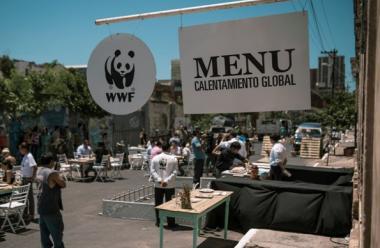 This week, Joss has spotted WWF’s campaign, ‘The Global Warming Menu’ that has a powerful environmental message. WWF’s latest campaign aimed to spread the message of global warming to the citizens of Paraguay with a clever use of experiential marketing.

Partnering with famous chef Rodolfo Angenscheidt, WWF implemented a pop-up restaurant with a twist in one of the hottest cities in the world - Paraguay’s capital, Asunción - where dishes were prepared as the chef put a pan to the street ground to cook raw food.

Angenscheidt was challenged to use the asphalt, which was painted with white contour lines to resemble a cooker, to cook a meal for attendees at the pop-up event.

With this outdoor cooking event, WWF made effective use of exceptionally hot weather conditions and a crowded street to profoundly communicate the severity of global warming in an accessible and highly visual way.

This initiative by WWF really struck me as it has all the well thought-out makings of a very successful experiential campaign; great visual elements effectively demonstrating the powerful campaign message, confronting a very current and relevant issue and a nice use of celebrity endorsement to push the campaign further.

The message has resonated with those at the experiential outdoor event – it has really got people talking in Paraguay, and what’s more it is spreading around the world thanks to the campaign’s sharable and viral qualities.

The campaign is an interesting way to raise awareness and convey an important message – the fact that due to global warming, Paraguay’s forests have dwindled by 80% over the past 50 years.

Although the campaign is very successful in raising awareness of the severity of global warming, I feel there lacks a call to action. Experiential aspects demonstrating how citizens can act on and reduce further effects of global warming would have been a nice and effective touch.

More charities are adopting experiential techniques to encourage people to support their cause. Have you seen the pop-up shop for the homeless in Cape Town over on the BEcause blog? The charity makes effective use of pop-up experiential marketing and visual elements to encourage donations.

Read more from Joss in our Cluhouse.