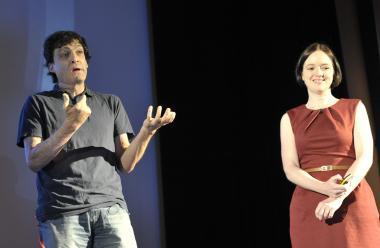 Behavioural Economics in action
Think piece
In this year’s conference, duo Dan Ariely and Anne-Marie Farrell presented real world applications of how to put behavioural science theory into practice. Together, they illustrated how to bridge the gap between the academic and business world, delivering some great examples of how to use the frameworks and concepts of behavioural economics (BE) in an executional way to nudge and steer behaviour.

Ariely set the context, talking first about some simple behavioural science concepts related to money, fairness and the power of free.

1. He described the pain of paying by cash, with its immediate sting, versus the anaesthetised spend of a credit card. He also identified the little nuance that paying with cash at the time of consumption is even more painful, and got us to imagine paying for a pizza bite by bite (not such an enjoyable experience). This is why a pre-paid holiday is the best kind; we can enjoy the holiday much more, having paid for it so long ago that the ‘pain’ of the outlay has completely disappeared and it feels practically free.

His discussion of the pain of paying brings to mind an interesting study by economist Amy Finkelstein about the low salience and pain free nature of electronic payments. Finkelstein looked at what happens when US tollbooths offer electronic toll collection, allowing drivers to breeze through without fiddling for change. She found persuasive evidence that the electronic toll weighed less heavily on people’s minds - they forgot exactly what the price was and began to ignore it. Toll collectors, quite rationally, responded by raising the toll.

2. Ariely then discussed the concept of fairness in how we assess the value of a service. In his example a locksmith wryly acknowledges his clients to have been more satisfied with his work at the beginning of his career when he took far longer to change locks simply because he wasn’t particularly good at his job. His customers then, he said, perceived the long time he spent as equating in some way to the amount of effort he was putting into the task and therefore to be more deserving of the fee he charged.   Now, as an expert in his field and able to change locks with considerable speed, his customers were more likely to resent his fees because he didn’t appear to have spent enough time doing it. Ariely says we need to think about communicating the total effort story to allow people to conceptualise exactly what they are paying for.

3. The power of FREE which Ariely defines in his bestselling book Predictably Irrational will be familiar to everyone.  Who doesn’t recall the power of the free Hershey’s kiss? And let’s be honest we all get a little more excited when we can get something for nothing.

Farrell talked usefully about how she had taken this learning and put it into action at Google in getting small businesses to use Google AdWords.  She talked about two simple offers:
The totally free first offer led to much higher conversion than the second, which achieved 40% less conversion.

A deeper behavioural insight was that the first offer seemed to attract the wrong kind of users. Users attracted by totally free don’t really engage and are unlikely to carry on as they won’t have got value out of the AdWords.  The Offer 2 users, on the other hand, who paid money, were more engaged, spent more time and effort on the process as a whole, therefore achieved more success and were more likely to become committed users.

Ariely made another interesting point about the power of free, commenting that often non-money incentives can be even more powerful as we can’t always envisage money so easily in terms of what it will give us – so a free book given out at a conference can be more motivating than an Amazon voucher!
In another interesting experiment conducted by Google, Farrell talked about five incentive options she tested for purchasing Google AdWords:
She had thought most people would choose option 5, whereas Ariely (and practically the entire Marketing Society conference audience) thought that most would choose option 3.  In fact both hunches were wrong as the winner was option 4 – the $20 Google play credit.  This led to a very interesting discussion about the power of hedonistic versus utility rewards such as AdWord credits. The critical take out here is that whatever our intuition tells us (even if we’re the experts), we still need to test, as every context may be different.
Ariely went on to discuss another important insight from behavioural science - implementation intentions. This describes how we stand a better chance of achieving our goals if we devise a specific plan (where, when and how) to enact them (The strategy was first identified by Peter Gollwitzer in his 1999 study and utilised by Obama in his 2012 election get out the vote strategy which asked voters to specify when, where and how they would vote).
To demonstrate this behavioural concept Ariely talked about an experiment to get people to have a flu vaccination using two scenarios.
The results were dramatic - 26% of people were vaccinated in scenario two compared to only 3% in scenario one.
Farrell then shared how Google had looked at narrowing the ‘action-intention gap’ in a real world trial using a battery of concepts from behavioural science.  She looked first at how to leverage BE in the initial recruitment campaign message and then once recruited, how to make sure people followed through on their intentions.

The initial recruitment campaign message for Google AdWords was the following:
‘My 3 month AdWord expert access plan’
Looking at this line through a BE lens we can see just how many concepts are involved here.
‘My (egocentric) 3 month (an anchor or reference point which frames how long it might take to work) AdWord expert (incentive to become an authority) access (exclusivity plays to egocentric bias) plan’.
On signing up Google wanted to get customers to commit to work with the expert in order to get the best results over the three months.  However, they also assumed that people may intend to engage initially but that their subsequent behaviour may not follow through.  So Google needed to use more BE to try to reduce the action-intention gap. Here’s how they tackled this stage:
They created a simple ‘fruit tree’ visual which customers could see growing over the three months, providing a simple, salient visual short cut and also mentally chunking the expected progress.  Cleverly, they also got the customers doing some actual work, thereby leveraging the concepts of the Ikea effect, endowment bias and sunk costs. They further added a layer of feedback, curiosity and personalisation by saying they would report which of their ads performed best in follow up expert calls.  And finally, they leveraged commitment bias by getting people to sign up to say when they would take the expert calls over the three month period – and put the dates in their diary.

This combination of nudges led to an 18% increase in applications and 14% retention in the longer term – a very successful campaign.

Ariely’s parting words were about how BE, with all its various frameworks and concepts, gives us the ability to understand complex humans. From this understanding we have the power to design or build a better world, but that we need to think deeply about what that world could or should be.

Most people I spoke to after the talk were extremely positive and saw it as a practical and engaging presentation, which brought the executional power of behavioural economics to life. There is a real appetite to see more examples of BE in action and the great news is we are seeing powerful examples every week across all sectors.
Read more from Crawford Hollingworth here and visit their site www.thebearchitects.com