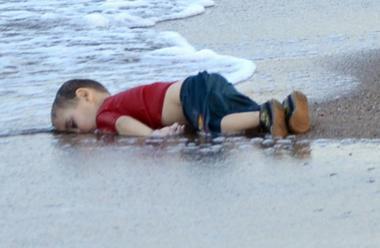 Bias in the Spotlight: Identifiable Victim Effect
Think piece
DEFINITION: We are more likely to respond and give support towards relieving the plight of a single, identifiable victim suffering under hardship than we are to large statistically defined groups of sufferers.
To the emotional part of our brain, a single death is a tragedy; a million deaths is a statistic. And this was the case when the photograph of Syrian refugee, 3 year old Aylan Kurdi, was beamed around the world in September. The harrowing photo showed him lying face down in the water on a beach in Turkey, after the boat he was on capsized and he drowned.
Compare this to the statistical version of Syrian refugee victims. So far in 2015, 3,600 refugees and migrants have died crossing the Mediterranean Sea – the same number as died in the Northern Ireland conflict in the 41 years between 1969 and 2010.  In the Eastern Mediterranean where more families are travelling, at least 30% of the crossing deaths this year have been children.
While these are distressing figures, a single identifiable victim such as Aylan often evokes a bigger emotive response, drawing on affect bias and System 1 thinking. We are more likely to respond to identifiable victims than to large statistics of multiple victims. People are unaffected by numbers. Knowing of an identifiable victim makes their plight real in people’s minds. Apathy increases as the victim numbers grow so large that they cannot be comprehended emotionally, resulting in compassion fatigue.
Paul Slovic, Professor of Psychology at the University of Oregon, recently highlighted how this single photo had captured people's attention. By constructing the graph below using Google Trends, he demonstrates how numbers of Google searches for 'Aylan', triggered even larger numbers of searches for 'Syria' and 'refugees'. (You can also see the huge spike in searches following the Paris attacks in mid November.)

This Google Trends graph plots searches over the course of 2015 for: Syria (in blue), Refugees (in red), Aylan (in yellow). Source: Google Trends, accessed 29 November 2015
And the photo of Aylan prompted huge donations in the following days too. However, the traditional definition of identifiable victim effect explains how aid and money is donated to a single victim - sometimes irrationally. In contrast, Aylan’s death prompted donations, not to his family, but to refugee aid organisations, particularly those involved in the rescue missions in the Mediterranean. Seeing the death of a single boy prompted people to act to help the masses.
In a 24 hour period, donors gave over £180,000 (over $275,000) to the Migrant Offshore Aid Station. Donations via PayPal more than tripled what the organisation had collected over the course of two years. In recognition of this, the charity has named its two high-speed rescue boats 'Alan' and 'Galip' in remembrance of Aylan and his older brother Galip who also died at sea.
This story is a very vivid and poignant reminder of the power of this effect. Thousands had already died trying to cross the Mediterranean Sea before September, yet it took the photo of a single boy to attract international attention...
Mother Theresa’s words identify the motivation created in her by this effect: “If I look at the mass, I will never act. If I look at one, I will.” Although identifiable victim effect can often lead to biased donations – huge sums of money going to a single individual – it can at least call us to action and ward off that other human tendency – procrastination.

Every two weeks The Behavioural Architects will put another BE concept under the spotlight. www.thebearchitects.com

Read more from them in our Clubhouse.