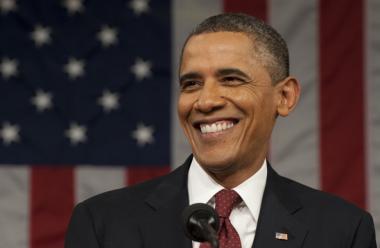 Think piece
What do Barack Obama, Vera Wang, Steve Jobs, Mark Zuckerberg, Tom Ford, Henry Rollins, Carolina Herrera and Albert Einstein all have in common?
They all wear almost the exact same outfit every day.
They have chosen to do so to reduce the number of daily decisions that they have to make, thus enabling them to get on with making all the rather more important decisions.
In an interview with Vanity Fair in October 2012, Barack Obama stated: “I’m trying to pare down decisions. I don’t want to make decisions about what I’m eating or wearing. Because I have too many other decisions to make”.
He explained that he tried to reduce or remove the unnecessary decisions that clutter most people’s day, to ensure he has the capacity to make the really big decisions required of a leader.
“You need to focus your decision-making energy. You need to routinize yourself. You can’t be going through the day distracted by trivia.”
But why is he concerned with the amount of decisions that he makes in a day?
It’s all down to a phenomenon called decision fatigue. 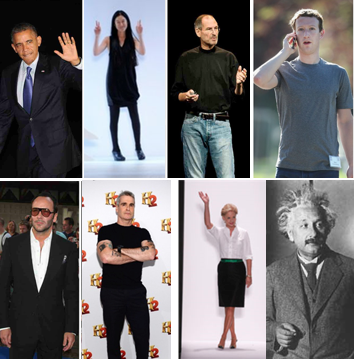 On average, the normal person makes about 35,000 decisions every day, 226.7 of which are about food alone, according to researchers at Cornell University (Wansink and Sobal, 2007).
Decision fatigue is what happens when your brain gets overwhelmed with making decisions and determines it’s too tired to make any more, causing your ability to choose between options to suffer.
Interestingly, it’s a quantity and a quality issue.
The size of a decision just dictates how quickly you get fatigued!  Big complicated ones suck the energy out quickly, while lots of mundane tedious ones drip the energy out slowly like a leaky tap. But the result is the same.
It doesn’t mean that you get physically tired, but your decision-making energy can be exhausted. What it means is that you’ve made so many decisions in a row that your ability to make good choices degrades over time, and it’s extremely likely that you’re now going to start making bad or rash ones without even realising it. So, decision fatigue is what happens when we’ve drained our mental resources and compromised our ability to do our best thinking and make the best choices.
The more decisions you make, irrespective of their importance, the more your willpower decreases and the quality of your decisions deteriorates, which also explains why diets tend to fail, as do our good intentions as we surrender to choices we might otherwise avoid. Intriguingly, as your glucose levels fall, so too do your decision making reserves, and conversely your decision reserves get replenished when your glucose levels rise!
A lot of research has been conducted and a 2011 article by John Tierney for the New York Times is widely credited for bringing the issue to the forefront. 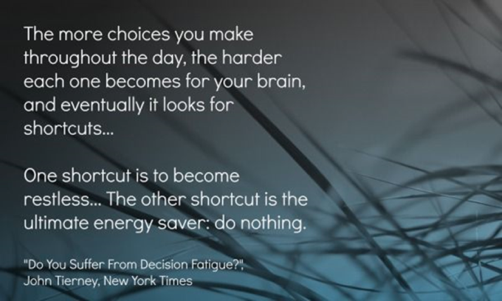 The research is compelling. In one study of 1,100 parole board decisions, prisoners whose cases were first heard had a far greater chance of early release than those under identical circumstances who were heard later in the day.
When the data was examined, at the start of each session the chances of a defendant getting a favourable outcome was 65%.
By the end it was down to almost 0%. The deciding factor on whether they were released or not turned out to be how tired the parole board were after analysing cases all day. 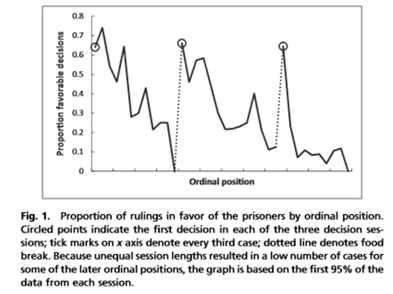 Another study, the infamous jam study conducted by psychologists Sheena Iyengar and Mark Lepper, discovered that the more choice presented, the less people buy. They analysed choices made by shoppers at an upscale food market and found that consumers were 10 times more likely to purchase jam on display when the number of jams available was reduced from 24 to six.
Why? The more options given, the more time and effort is required to make a choice together with an increased psychological burden as the opportunity grows to make the wrong choice, leading to regret and buyer’s remorse.

But, we’ve all been there. The day-long set of meetings where each one involves making critical decisions. Early decisions receive meticulous and conscientious analysis and discussion, but by mid-afternoon people are willing to make hasty choices in order to end the meeting and get home.
Or keeping to your diet all week but splurging on a calorie-laden takeaway because you deserve it, followed by a sackful of candy.
Or the kettle blows up and you go to your e-retailer of choice and search for “new kettles” whereby 47,917 (Amazon UK) or 12,193 (eBay UK) results appear. You refine the search and narrow it down to 305 results. You read a few reviews of the most popular ones and you finally make a choice after maybe 40 minutes or so. You go to pay and are hit by five or six delivery options. You lose the will to live and think how hard is it to boil a pan of water or to use the microwave.
Recognising the impact that decision fatigue can have is the first step in helping you get through the tough days that we all sometimes have. 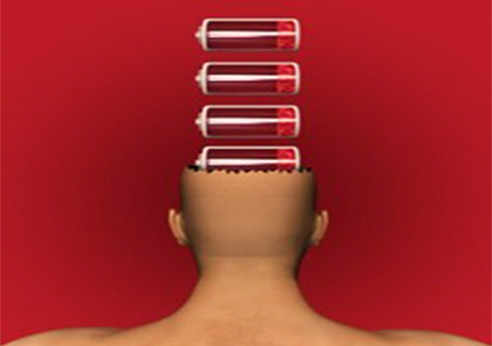 What can you do to help prevent decision fatigue?