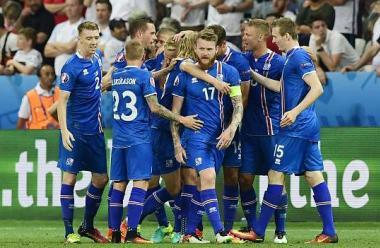 Anyone unlucky enough to have seen England play in Euro 2016 will know what a team looks like when it isn’t connected, inspired or led. The day after losing to Iceland, Roy Hodgson began his press conference by declaring ‘I don’t know what I’m doing here’.

Looking at his team the night before, neither did they.

Compare and contrast that display with some of the performances at the Rio Olympics. The US Women’s Gymnastic team led by the extraordinary Simone Biles. Or the GB’s Cycling team. Or the GB’s women’s Hockey team.

What did they have that the England football team didn’t have?

Well, the new incumbent of the trampoline-seated England Manager’s post will be figuring that out.

But what we can safely assume is that they had what any collection of people that have been brought together to achieve something have. Whether it’s on a pitch, in a shop, on a stage, in a boardroom, on an expedition or in a business tender. They’re led not by being told to do something, but by being inspired to believe why it’s important. They’re connected. And that’s true whether you’re in a team, a four-piece band, a gang, a group, a department, a division or a massive great gigantic continent-spanning corporation. The same principles apply.

As Roger Waters sang, ‘if the band you're in starts playing different tunes…I’ll see you on the dark side of the Moon’ which presumably was meant to be a metaphor for not a great place to be, given that particular song was titled Brain Damage.

In the simplest terms, they have an identity. And that doesn’t mean a nice logo. It means a clearly articulated and unifying point of view on what, how and why they do what they do. And a manner, approach and style as to how they will achieve it. Recognisable, consistent and fluent.

One of the best books on branding that was never intended to be a book on branding was published by the US Marines. Titled War Fighting, the book shares the philosophy of the Marines, of getting the job done, written in brutally unambiguous language, to ensure each Marine will react in entirely the same way when the heat is on. Meaning, they operate together. They’re consistent. They know what each other will do. They’re connected. They’re know precisely why they’re anywhere.

Look at some of the great brands out there. They operate with the same clarity of vision and simplicity of execution and well-understood identity that means they prevail in any situation, competitive or otherwise.

Check out Lidl, a consistently good performer by all measures and it’s little surprise that the brand features strongly in our Global Brand Simplicity Index. Have a drink at any Soho House, you’ll find the experience is defined by a sense of identity that connects each of the ‘houses’. Go to any Mini dealership, you’ll be met by the same attitude, experience, tone and service dialed up to the max. Each creates an overall impression that is built on a series of interactions that ladder up to an experience that a consumer can ultimately trust.

How do brands achieve this? It’s about great leadership, defined by three core principles that anyone leading, managing, directing or living a brand would be well served to use. They never fail.

1. Be Authentic. It’s much easier to be true to yourself than trying to be something else. And once you have that figured out, you never need to introspect on that subject again.

2. Be Empathetic. Sounds so obvious. But the ability to understand and share with feeling is fundamental. Show that you feel what your team, audience or other interested parties feel.

3. Be Logical. Make sure you make sense. Clear, sound reasoning trumps complicated, obscure theory any day of the week.

It’s as simple as that.

It’s too late for Roy Hodgson. But had he used these three principles, his team would have known why they were there and they very probably would have found a way to play like the lions on their badges rather than the lambs they resembled.