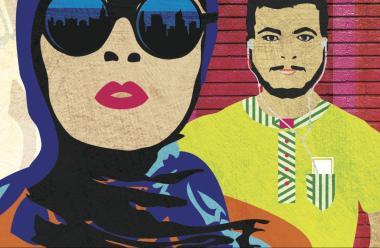 Buzzing, was definitely the word, with standing room only at the book launch earlier this month, and guests stating that they found it ‘inspiring’ and that ‘they came away with so many ideas.’

That’s what happens when you can take huge global economic and political trends and map their convergence with social and cultural shifts, and express them through the human voices that represent that intersection.

The numbers are big, huge in fact. Sir Martin Sorrell, CEO and Founder of the WPP group says this is “one of the twenty-first century’s most important economic forces.”

Paul Polman the CEO of Unilever explains they are “rapidly representing 25% of the global population” and “deserve all attention and respect.”

They’re right. There’s a segment within a global population of 1.6 billion, whose characteristics involve being young, living in some of the fastest growing economies, increasingly middle class and very brand conscious. One third of Muslims today are under fifteen and approximately two thirds are under thirty. They are estimated to spend $2.6 trillion every year on Muslim lifestyle products.

They believe that faith and modernity go hand in hand and that they deserve the best of both. For them, consumption in line with their faith principles is a badge of their identity. They are inspired by their faith to live a fully engaged life with the world around them. And they believe that today’s 21st century world can and should make their own faith stronger and better. They are proud of their faith and see it as a force for positive good in their societies and the world around them.

So important is this consumer group, and the role they will play both for Western brands mapping out their growth in the coming years, as well as smaller brands starting up and growing, that the launch was opened by John Seifert, the global CEO of Ogilvy Worldwide who had come in for the launch from New York. The introduction was given by Sir Martin Sorrell.

The phrase ‘Generation M’ has become currency. The UK media immediately realised that there is a story to be told here. The Guardian ran a full page feature.  The Pool and Buzzfeed both reviewed the book – and found it filled a gap in our knowledge about Muslim audiences that is both insightful and refreshing. I’ve spoken to the BBC in all sorts of places – BBC World Service, Radio 4’s the Sunday Programme, Woman’s Hour, BBC Asian Network, and more is still to come.

In Birmingham the idea was jumped on, and the Birmingham Mail ran a feature on some of its key Generation M citizens.

Within days of the book being released I had young Muslims writing to me saying “I opened the book and it felt like at last someone was talking about me”. Being given a voice and a platform is crucial for young Muslims. And this is particularly the case when it comes to brands. The aim is to go beyond talking ‘about’ Generation M, and instead talking ‘to’ them. And that’s precisely what we did at the launch event, creating space to hear their stories and to hear first hand what it is they want from brands.

The atmosphere really is buzzing after the launch, precisely because the industry is now alive to the idea that there’s a story to be told, and consumers to be engaged with.

So for me at Ogilvy Noor, the specialist division that looks at engagement with Muslim audiences, this is where the work really begins.