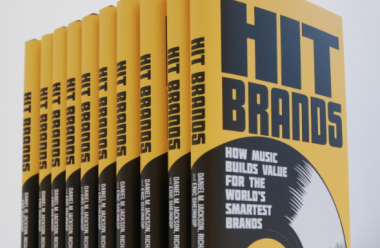 I think I was wary because I have always been a massive evangelist for getting the right music on the work we produce. Our recent “Stepping” ad for Honda at mcgarrybowen was looking pretty un-engaging at edit stage until the ECD, Paul, stepped in (no pun intended) and made an inspired music choice and turned it into gold. Most of us have heard the – probably made up – story of the choice of music on Cadbury’s “Trucks” ad (supposedly it was meant to have “Living on a Prayer” on it, and it sounds far better with it). So, what is this book about?

It’s a really good, rather compelling, very well written analysis of the powerful role music plays in the creation and sustaining of a brand – in all forms from ads to retail environments.

It breaks down the role of music into three simple factors – Identity, Engagement & Currency. And then it outlines a sensible and cogent thesis on each, and follows it with 2-3 really good case studies to make the points.

The most obvious – but no less vital for it – point it makes in relation to music and adverts is that as it’s been proven how pivotal music choice can be the success or failure of an ad then why do we normally leave it so late to choose it? It should be an integral part of the creative process from the very start, and not something that one asks about a couple of days before the main client presentation.

Each of the three sections features some really interesting case studies. The first one on Identity focuses on Nescafe and Nokia, both fascinating pioneers in the use of music in brand identity. The second one on Engagement has a really interesting case on how Sephora helps build its retail engagement through music. The final chapter on how music is evolving as currency in the new digital era features a very interesting & in depth study on Coca Cola.

In short, it’s really worth a few hours of your time, especially if you’re about to sign off some serious six figures on music usage!
As a model for how to do it or how to ensure a “hit”, I remain suspicious.

As a sensible and well-researched analysis of how and why music is a massive (and growing) part of establishing your brand identity, bravo.

I’m still, however, miffed they chose to ignore my personal favourite example of Carphone Warehouse and the Stereo MC’s “Connected”.