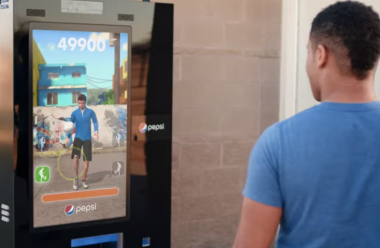 This week, he takes a look at Pepsi and their innovative vending machines which accept football skills as payment.

I know the score (it gets worse…) when it comes to great experiential marketing, and I’m always on the lookout for examples of brand experience which really get people talking.

With Brazil’s 2014 FIFA World Cup on the horizon, Pepsi is continuing its marketing drive by introducing a football powered vending machine.

You show you’ve got the skills, and in return, you nab yourself a refreshing can of Pepsi.

I think many people will get a kick out of these vending machines which ask you to do ‘keepy-uppies’ for 30 seconds, while the machine monitors your success using Kinect motion sensors. Once your game is over, a good player will get a well earned Pepsi to refresh them after their challenging workout.

I think these vending machines really hit the ball out of the park when it comes to experiential marketing.

Pepsi isn’t the only brand to create a great campaign to mark the World Cup. Adidas kitted out one of its ‘Brazuca’ balls with 6 HD cams in their latest effort, producing amazing 360-degree videos from the ball’s point of view!

The football-powered vending machines are just a part of Pepsi’s World Cup advertising, which was kicked off with this brilliant interactive advert ‘Now Is What You Make It’ earlier in the year.

The company’s augmented reality bus stop earlier in the year created a huge buzz on the web too, proving that Pepsi really know how to reach the back of the net when it comes to utilising experiential and technology.

Vending machines are always being used in new and interesting ways, and last year we were bowled over by a Milka vending machine which got people holding hands.

Pepsi’s arch rival Coca-Cola is a big vending machine lover too. They’ve created machines which respond to all sorts of stimuli including a vending machine which only has eyes for couples and another which dispenses ‘happiness’ in the shape of items from flowers to pizza.

Vending machines aren’t the only things which have accepted unusual currency as part of an experiential campaign, and we recently put the spotlight on The Walking Dead blood-as currency store.