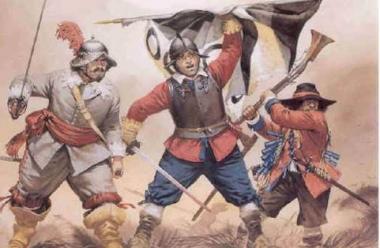 Blog post
In 1648, England was involved in a vicious civil war, Royalists against Roundheads.
The Royalists, obviously, sided with the King.
The Roundheads sided with Parliament, against the King.
In one particular battle the Roundheads fought the Royalists in Essex.
The Royalists retreated inside the walled town of Colchester.
The Roundheads couldn’t get at them.
So they decided to starve the Royalists out.
They surrounded the town so that no one could escape, and no food could get in.
After the soldiers had eaten all the town’s food, they began to starve.
So did the townsfolk: women, children and old people.
First they ate their horses, then they ate dogs, then cats, then rats.
Then they ate soap, then candles, anything to survive until relief came.
But, after eleven weeks, they saw the Roundheads celebrating outside the town.
And they got the news that the main Royalist army had surrendered.
So there wasn’t going to be any relief.
All the Royalist soldiers inside the town were forced to surrender.
The Roundheads, having taken Colchester, moved on to Chelmsford.
At Chelmsford, the Royalists were under the command of Sir Thomas Sissye.
The Roundheads got ready for a similar siege.
But when they arrived at Chelmsford Sir Thomas Sissye had already heard about what happened at Colchester.
Sir Thomas Sissye and his men surrendered without a fight.
He and his Royalist soldiers just laid down their arms.
The Roundhead soldiers were so disgusted that they made them take off all their clothes.
Then they made them put on women’s clothes.
Then they paraded them around the town, saying: “If you can’t fight like men you can dress like women”.
That was how Sir Thomas Sissye and his men were humiliated.
Word of it spread all over England.
And soon, anyone who was cowardly, or dressed in an effeminate way, was known as a Sissye man.
Which was soon shortened to sissy, and retains that meaning today.
The modern dictionary defines a sissy as: “An effeminate man or boy: a timid or cowardly person”
Because that’s how language works.
First, people make up the meaning.
Then, if it’s catchy it spreads, then it passes into common usage.
What we now call going ‘viral’.
The interesting thing for everyone in the communication business is that we can just invent language.
We tend to think of the dictionary as the law.
But it never was.
In fact it’s actually the other way round.
The dictionary is a record of the language people invent in order to communicate.
The dictionary was never meant to be a restriction on communicating.
We can make things up and get them into the language.
As Steve Jobs said:
“When you grow up you get told the world is the way it is, fixed and immovable.
Try not to bash into the walls too much.
But that’s a very limited life.
Life can be much broader once you discover a simple fact: everything around you was made up by people who were no smarter than you, and you can change it.”

Read more from Dave in our Clubhouse and on http://davetrott.co.uk

Dave spoke at Advertising Week 2015. Read the 50 things we learned during the week, including some wisdom from Dave here.

As part of our legends series, Dave is also running a creative masterclass for us on 16 July. To find out more and book tickets head to our events page.