No one needs a guide to writing protest signs. The whole point is that they’re a (literally) crowd-sourced tradition that springs from raw political feeling distilled into urgent slogans that often prove surprisingly enduring.

‘Make Love Not War’ started life on placards and badges in the 1960s and was voted one of Creative Review’s all-time top 20 slogans.

Neither was written as a result of someone reading a guide to slogan writing.

But protest has taken on a performative aspect in recent years – it’s as much about the tweeted picture as it is about the protest. And the placard is the focal point – probably the most shared aspect of any demonstration. 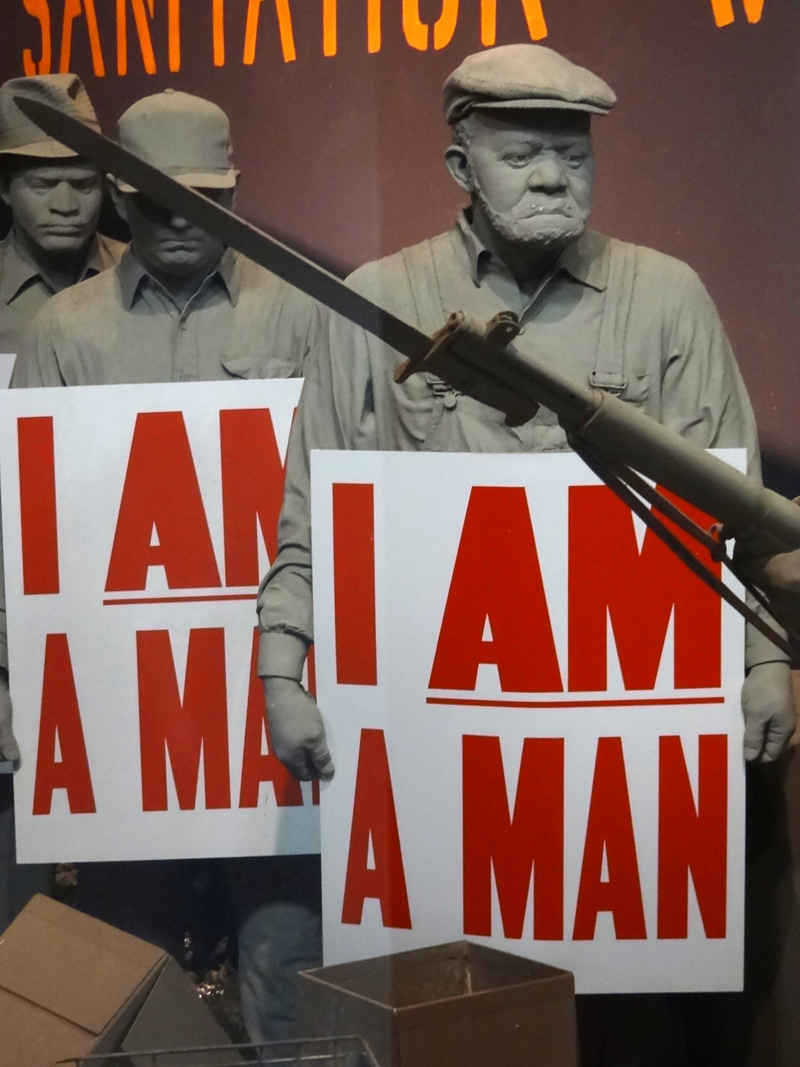 You can see this as a loss of innocence, subsuming selfless political protest into the self-regarding rituals of social media. Or you can embrace it as an extension of a folk tradition – the throngs on the streets meeting the throngs online, and both drawing power from each other. The dynamic works both ways – ‘Black Lives Matter’ started out as a hashtag before moving onto the streets.

One thing that hasn’t changed is the messy folk aspect of slogan writing. It’s hard to trace the provenance of most slogans – the people and signs pictured in this article are mostly not the ‘originals’. That’s as it should be – slogans are meant to be shared, and the collective act of protest demands a common resource of words. But that pool needs constant refreshing. So if you’re heading to a protest and looking for a line, here are some places to start.

Officially endorsed slogans are seldom the way to go. This one overlaid the target’s name (Trump) onto the positive verb in the sentence (conquers) in a way that makes your head hurt. 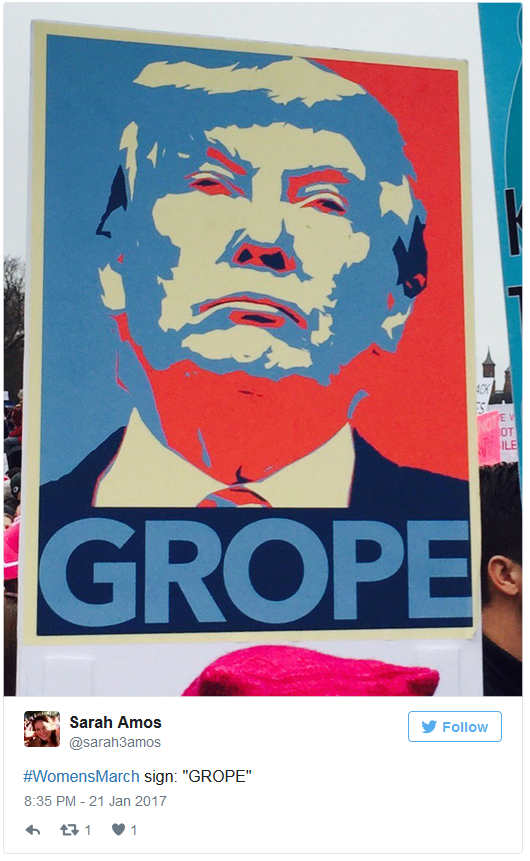 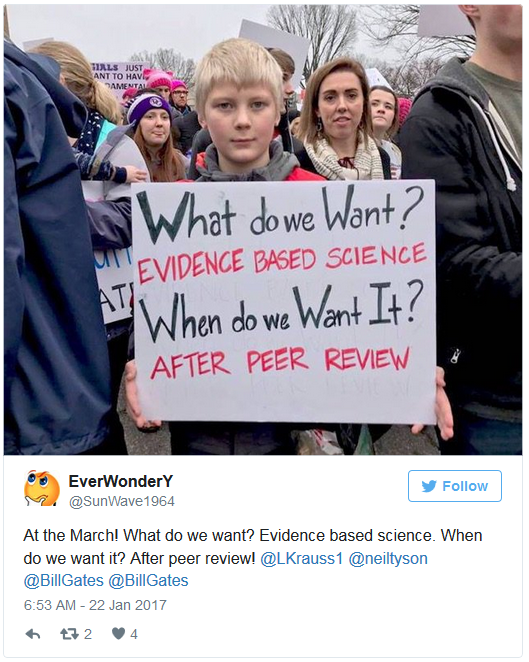 Rhyme is a sneaky way to tie an allegation to a name. Margaret Thatcher reportedly hated the ‘milk snatcher’ label and Theresa May will be cursing the fact that her name rhymes with ‘appeaser’. 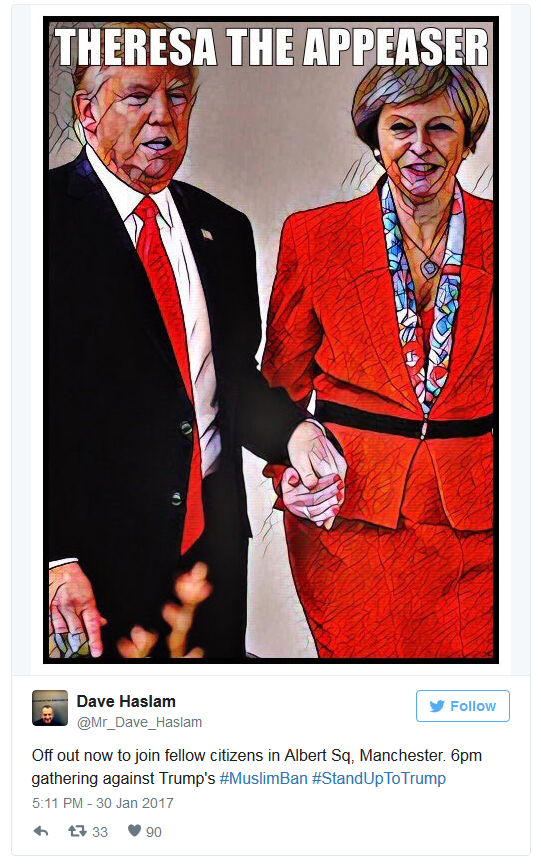 Puns have to be deployed with care, but the Women’s March produced ‘Electile dysfunction’ and ‘My favourite position is CEO’, among many others. Going back to the miners’ strike, it’s hard to beat ‘If Maggie gets up your nose, picket’. 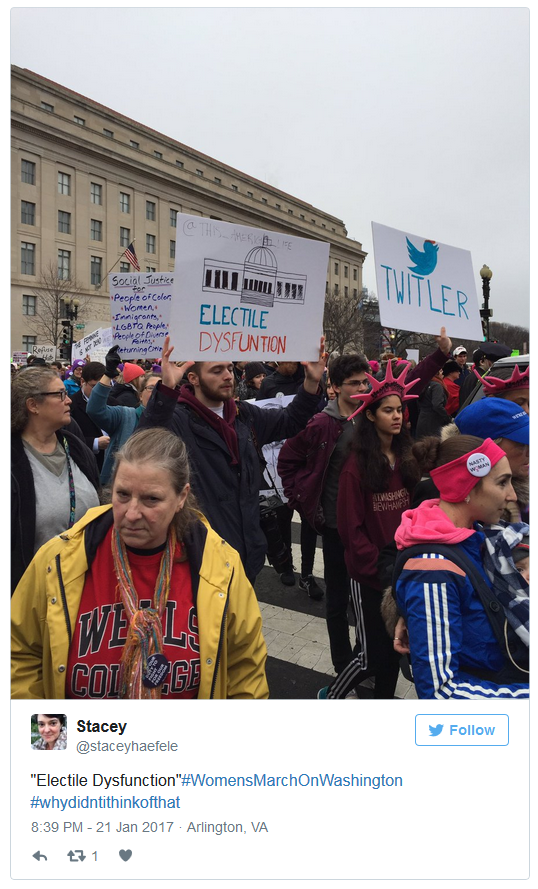 You can quote the enemy’s language mockingly back at them – ‘Sad!’, ‘Bigly feminist!’. Or you can take an accusation, embrace it and retool it: ‘Damn right we’re snowflakes. Winter is coming.’ 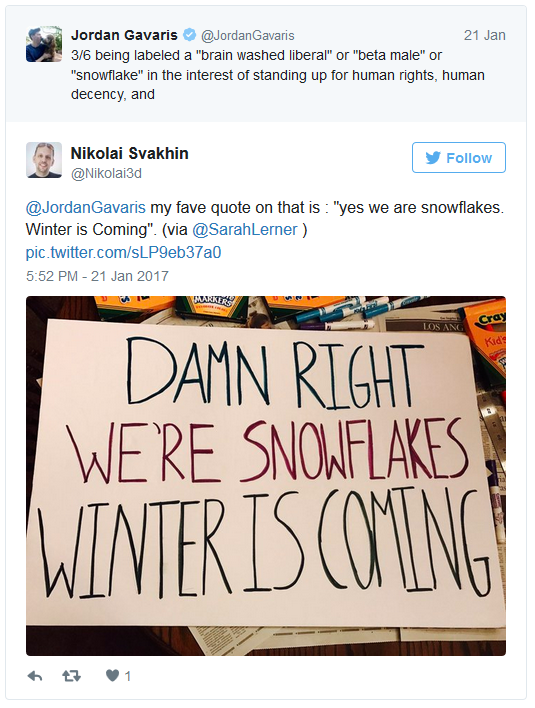 The performative aspect of protest has led to an outbreak of irony and meta-ness. ‘Not usually a sign guy but geez’ was an example from last year. The British have embraced this approach with ‘Not usually my thing marching but honestly’, ‘I’m so angry I made a sign’ and ‘So bad even introverts are here’. But take care – get too meta and you start to seem detached. One variation is ‘I am too worried to be funny’, which manages to be both meta, and a critique of the other meta people.

‘Fuck the fucking fuckers’ will always work, as will ‘Get fucked Wotsit Hitler’ (NB: These may draw disapproving looks from parents at daytime rallies.) Swearing doesn’t necessarily mean a lack of sophistication. ‘Unfuck Greece’ was a two-word line that encapsulated a political argument – that the situation was an act of wilful economic aggression that could wilfully be undone, and was allowed to happen because of a general prejudice that had to be challenged. It was a great slogan. 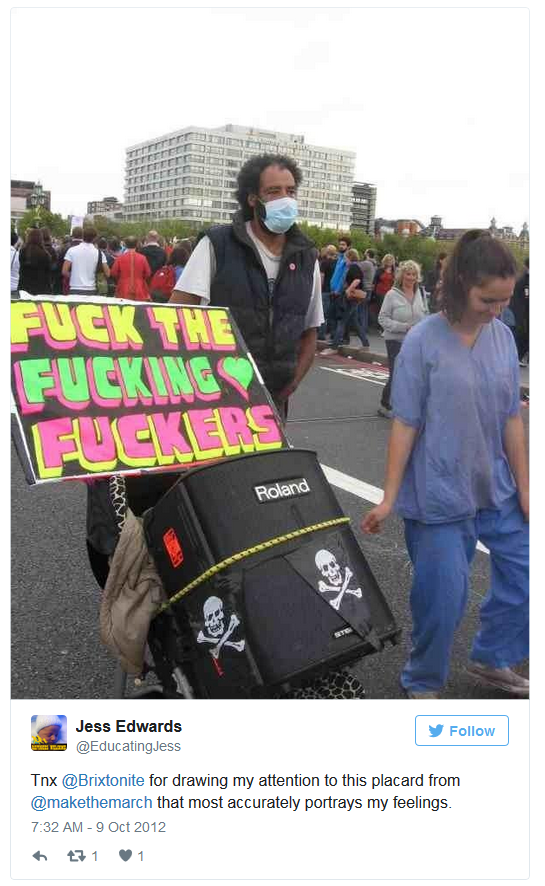 These are less likely to be quoted in 50 years time, but they signal a shared set of cultural reference points. See ‘Orange is not the new black’ and ‘He’s got 65,844,944 problems and this bitch is one’. Referencing memes also works – as in ‘This is my resisting bitch face’.

9. Do the Mary Poppins one 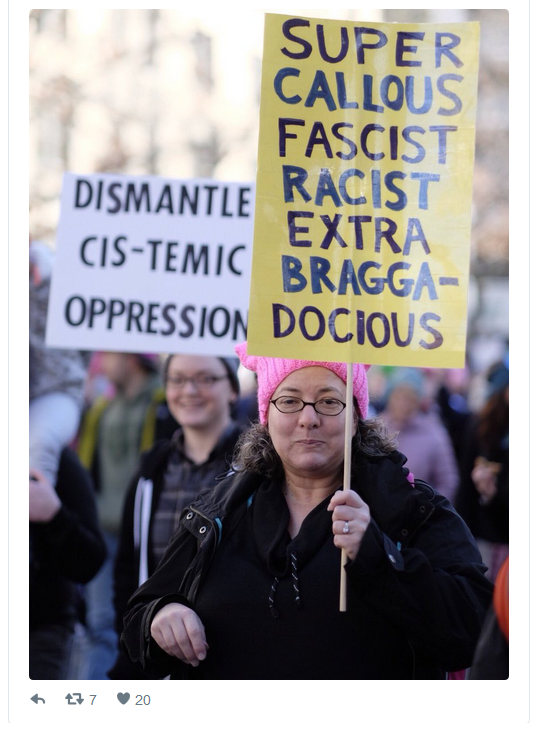 There’s mileage in breaking out of the mass audience dynamic to address one person – aka the ‘Hello mum’ approach. ‘Melania, blink twice if you need help’ was a good example in the women’s march. 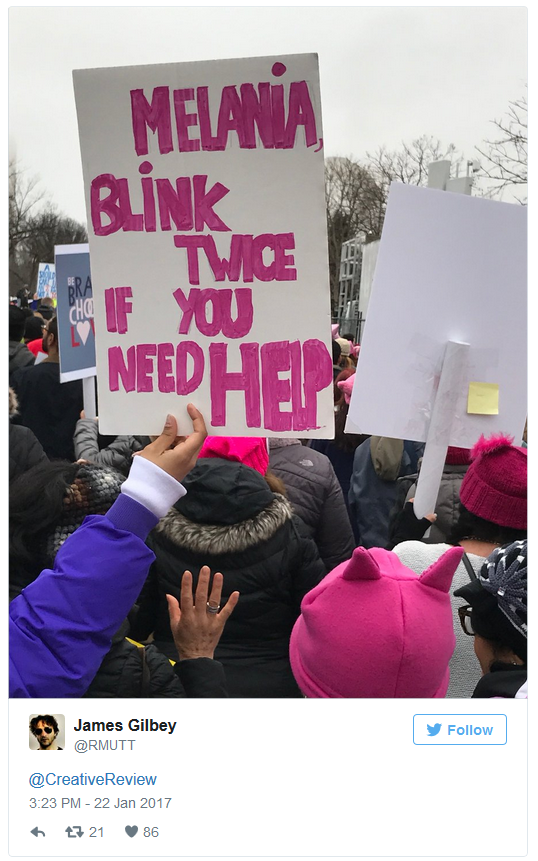 Some slogans draw their power from the person holding the placard. If there’s a child in the picture, they can say something disarmingly simple – ‘I like everyone’, or ‘Be kind’. Or they can scribble a picture with no message – an unintentionally sophisticated comment on the semiotics of protest as pure self-expression.

At the other end of the age range, you can play the ‘wouldn’t expect Grandma to say that!’ angle. See ‘I can’t believe I still have to protest this shit’ and ‘Now you’ve pissed off Grandma’. 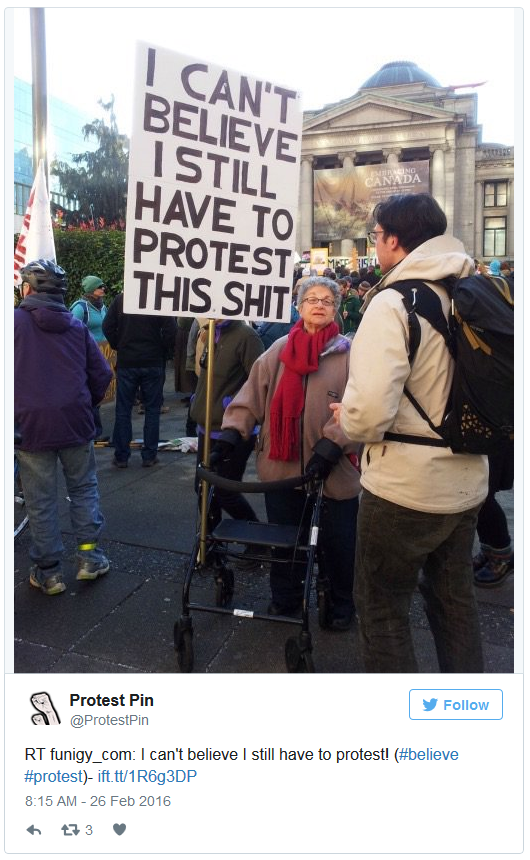 A dog opens up a canine dimension to slogan-writing. Recent highlights include ‘Even I understand no means no’. And ‘Bitches against fascism’.

There’s an avant-garde movement in placard writing that looks beyond slogans. The Tahrir Square protests in 2011 included a flowchart translating as ‘Civil disobedience -> Mubarak leaves -> No (loop back) / Yes -> Parliament dissolved -> Constitutional reform’. There will be more of this.

There’s also the purely visual approach, which has the advantage of crossing language barriers. Ian McKellen holding up Patrick Stewart in meme mode was a nice moment. 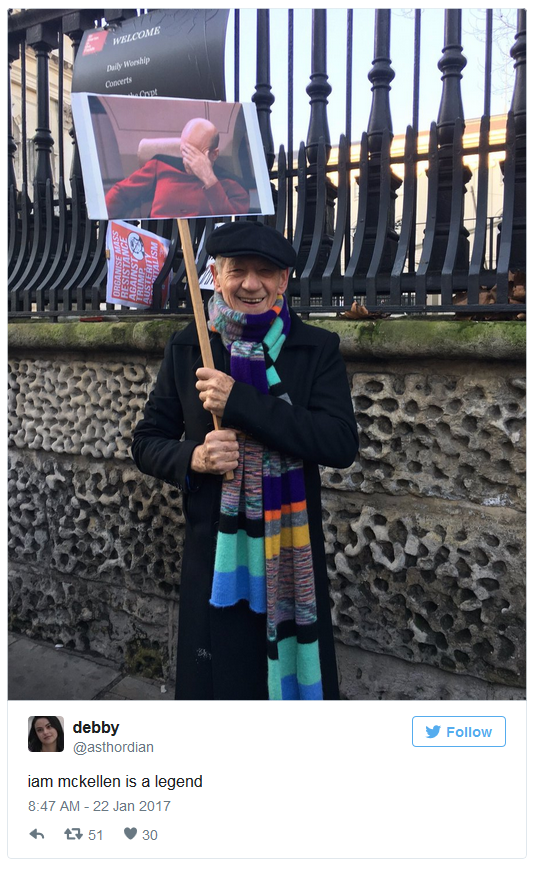 A placard doesn’t have to be a placard. ‘When they go low we go high’ (a good officially-endorsed slogan) works well on a balloon. A brave man made a ‘This is the last straw’ pun using a giant straw. You can also use the people around you as props – as in the many ‘I’m with her’ signs.

This could be the next trend. In 2013, an anti-Murdoch protestor carried a sign with about 400 words on it. It seems odd, but now that signs are routinely captured on social media, everyone has the time to read long copy. It’s the equivalent of Twitter – a short-form medium now being used for extended threads.

You can also be the visionary who explores new technologies. On a basic level, you can bring a wipeboard instead of a sign – a commentary on protest as a daily ritual. More imaginatively, we may soon see a drone-only protest. If Uber can do a (legally dubious) advertising stunt using drones hovering above stationery traffic, maybe we’ll have placard-carrying drones marching down Whitehall. And they’ll probably write their own slogans. 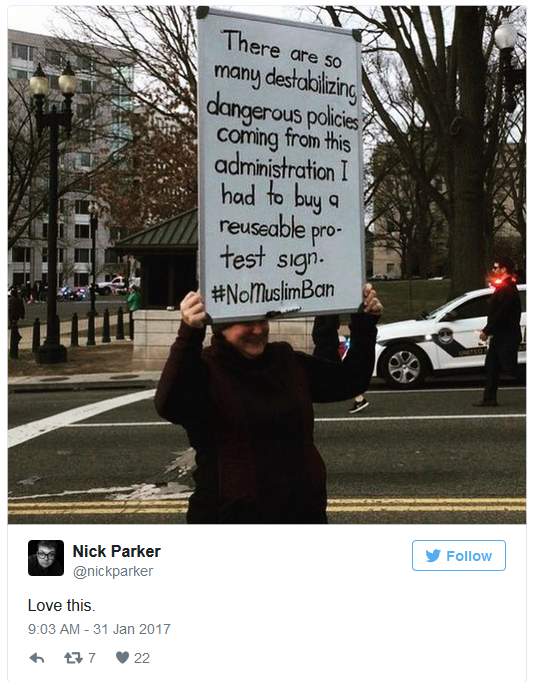 There’s nothing wrong with ‘Refugees welcome’ and a lot right with it.

Originality is not a requirement in a slogan – people can and should work together. In that spirit, and so that this article isn’t seen purely as a detached, ironic commentary in these times of direct action, I’d like to end by joining in. If you’re reading this, go fuck yourself Wotsit Hitler.

Nick Asbury is a writer for branding and design and one-half of creative partnership, Asbury & Asbury. He tweets via @asburyandasbury This piece first appeared here. 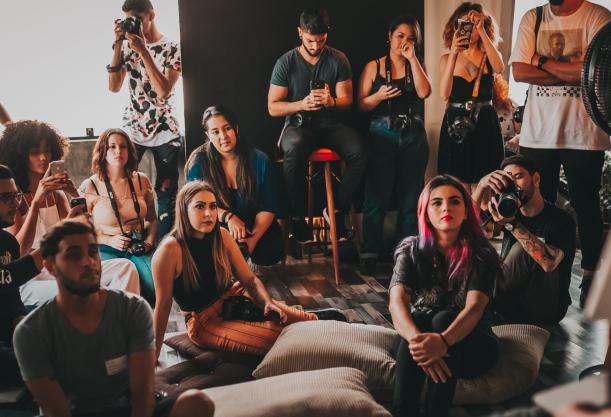 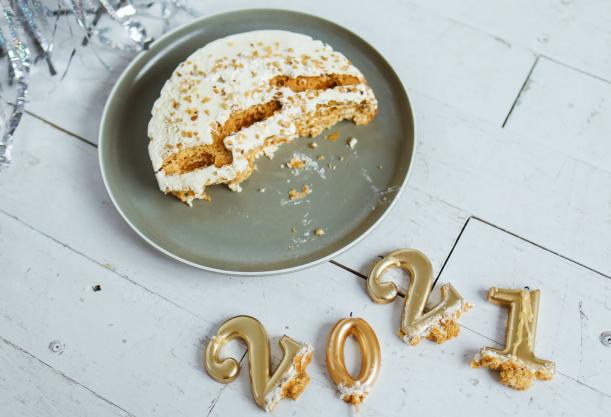