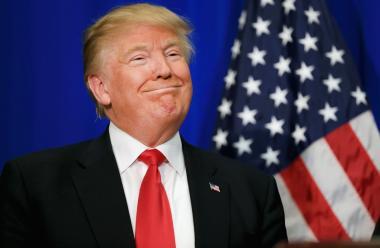 Mention Donald Trump these days and you find everyone has something to say about the notorious Presidential candidate. Understandably, there have been reams of analysis on his behaviour, political style, opinions and his supporters’ opinions, by everyone from political commentators in the media, to social and political scientists.

We wanted to contribute to this discussion with a new angle - by looking at Trump’s quotes, statements and tweets through the eyes of behavioural science. If you’ve grasped the basic tenets of this science, you’ll already know that we are all influenced by cognitive biases. Our judgements, perceptions, decisions and ultimately our behaviour are all swayed by the biases and distortions that are wired into our thinking.

So it can often be incredibly revealing to analyse communications through what behavioural scientists and behavioural economists call ‘a BE lens’, looking out for and identifying any biases evident in what people say, or if they are leveraging (consciously or subconsciously) a cognitive bias to connect and sway others’ judgements and decisions.

Much of what Trump says may simply be sensationalist bluff. But if we dig a bit deeper into other statements and comments, we can see evidence of four well-known cognitive biases and concepts from behavioural science being used.  Consciously or subconsciously?  You decide!  Are they engineered in application or simply intuitive communication? Top behavioural scientists have been brought into many election campaigns in recent years, and Trump himself has employed Cambridge Analytica to target non-voters with highly tailored campaign messages.  It’s the same behavioural data science firm behind the Brexit campaign - so it’s a reasonable speculation that Trump’s communications are being optimised or even that he is well-versed in behavioural science himself.

Playing to people’s most vivid personal experience
Trump frequently draws on what behavioural scientists call availability bias. This is a mental shortcut where what comes to mind most easily is regarded as more likely to happen. And what comes to mind for most people are vivid personal experiences, observations and anecdotes, particularly any recent events which are freshly painted in our minds. An emotional experience is usually much more influential in our judgements than a dry page of statistics because we are evolutionarily wired to respond more to emotion, whether it is fear, sadness, anger or happiness.

Take these quotes from Trump on climate change, the autism-vaccine link and healthcare staffing. In every single one, he draws on a personal experience or the experience of a friend to make his point, rather than facts and numbers.

Whether he does this knowingly is another question… Has he been schooled in some basic concepts from behavioural science, read Daniel Kahneman’s bestselling book ‘Thinking Fast and Slow’ or does he have a behavioural science savvy communications team driving the wheel?  But if we believe this science is being used knowingly, he may be leveraging this effect in order to resonate with voters. For example, a voter in Texas may well look out the window at the ice storms and agree how odd it is that it’s so cold, leading them to be suspicious of global warming claims.

Fuelling people’s desire to see what they want to see
Many of Trump’s statements also exhibit a phenomenon called confirmation bias - when we only notice and believe evidence which supports our existing beliefs and viewpoints. Warren Buffett’s observation that “What the human being is best at doing is interpreting all new information so that their prior conclusions remain intact” is highly accurate for Trump. He is always looking for evidence to show that his views were right all along. These two quotes on Islamic terrorism are good examples:

In addition, you can see that he also has a habit of letting everyone know that he was right all along!

Trump draws on the concept of anchoring frequently to make his point more persuasive. For example, he often argues that the US economy is being left behind in China’s wake, by making statements such as this one:

(Occasionally though his comments seem to wander off into pure craziness! Take this one: “People say my wall idea is crazy. China built a wall, and guess how many Mexicans they have. Checkmate.”)

To instill hope (or fear, depending on whether or not you support his Presidential campaign) that he will win the upcoming election he likens the future outcome to the recent EU referendum:

Making all he says easy to understand
One fourth and final concept which Trump draws on is what behavioural scientists call cognitive ease - when information is presented in a way that is easy to process and understand. In practice, this often means using simple language to make a point; avoiding complex grammatical structures, long sentences and multisyllabic words in favour of short phrases and simple vocabulary. Linguists generally agree that Plain English is the most effective way to communicate to any audience, but particularly if there is a need to appeal to a wide audience with varying levels of education and intelligence such as the US electorate. Some studies have also found that we tend to trust people who speak plainly and even find them more credible and intelligent.

A recent comparison of campaign speeches by researchers at Carnegie Mellon University* found that Donald Trump generally used a simpler language style than his opponents and past Presidents. Whilst Trump’s grammar typically corresponds to that used by students aged 11 and under - grade 5 in the US - other candidates’ language corresponded to grade 6-8 and as high as 10th grade in some cases.

Comparing vocabulary revealed a similar pattern; Trump chooses words that correspond with those that a student aged 12-13 or 7th grade would use whereas Hillary Clinton compared to 9th grade and Barack Obama, the former Democratic presidential candidate Bernie Sanders and even George W Bush all use language corresponding to that of a student in 10th grade - aged 15 to 16.

Both the simple vocabulary and easy phrasing and grammatical structure build considerable cognitive ease so that what Trump says is optimised to voters’ ears.   Here’s Trump addressing a rally on Capitol Hill to protest the Iran Nuclear Deal negotiated by Obama’s administration in September 2015:

Conclusion
The above four concepts identified by behavioural science are fascinating examples of how communication can be twisted for an advantage by playing on inbuilt biases and ways of decision-making. Whether by design or by chance, Trump is certainly using behavioural science effectively and we will see how effective it has been next week...

Yet this also points to a more sinister development. We would not be the first to say that the global political landscape seems to be shifting to a world where the value placed on truth has been quashed in favour of a new language of lies. Former BBC Head Mark Thompson points out in his recently published book ‘Enough Said’ that in the current political climate “...what matters most is not argument, but story… If something feels true, then in some sense it must be true.” Tim Harford, FT journalist and presenter of the award-winning BBC statistics programme More or Less, has also noted a worrying trend in politicians manipulating and cherry-picking statistics to suit their needs. The EU referendum campaigns were a good example.

This seems to be the new, rather worrying, language of politics in 2016.

Read more from Crawford Hollingworth in our Cluhouse.